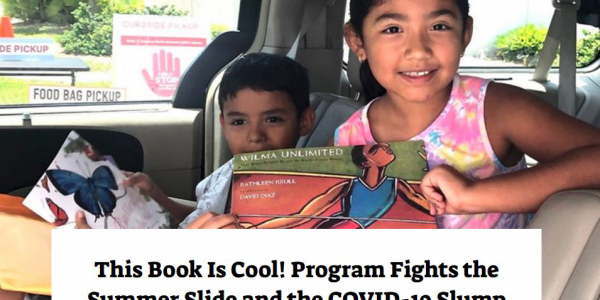 THIS BOOK IS COOL! Program Fights the Summer Slide and the COVID-19 Slump

Editor’s Note: This article was originally published in Early Learning Nation. K.C. Compton is a Seattle-based journalist enjoying life as a freelance and contract writer and editor.

Most of us have heard of the "summer slide" in which children lose some of the lessons they've learned during the previous school year. For children from under-resourced communities, the loss can be significant; these children tend to lose roughly 30 percent of the gains they made in math during the school year and 20 percent of their reading gains.

According to the Brookings Institution, children from underserved communities generally keep up academically with those from more privileged neighborhoods during the school year: The loss is due to the time outside school.

Since March, millions of children and adults have had nothing but time outside school, and the summer slide has morphed into what researchers are calling the COVID-19 slump—schools closed; teachers and schools thrust online; preschools, daycares, and kindergartens closed or are dealing with drastically reduced staff and hours—a nerve-wracking recipe for academic loss.

On Florida's Gulf Coast, the Suncoast Campaign for Grade-Level Reading had been asking what more it could do to combat the summer slide. For several summers, the organization has sponsored its Suncoast Summer Reading Challenge, which engaged various community partners in a four-county region in challenging children to read at least six books at their level over the summer.

Over the years, the program has been able to aggregate data for cohorts of children who have participated in the summer challenge. The campaign found that of the children with reading loss, they had lost an average of two weeks of reading skills over the summer, rather than the two and a half months that is the normal summer slide. Keeping children reading over the summer made a measurable difference in their reading retention.

"We had been looking at how we might provide quality instruction to the folks on the front lines who were working with the children to keep that momentum going," says Beth Duda, director of the Suncoast Campaign for Grade-Level Reading, a community-wide effort to help children succeed in life by ensuring they're reading at grade level. The campaign is part of a nationwide movement and focuses on four counties in Florida—Charlotte, DeSoto, Manatee, and Sarasota—to deliver support and resources to children in the Suncoast region.

"We had been thinking about creating some brief instructional videos (on books in the program) that a camp counselor at Parks and Rec could look at in the morning, for example, and say, 'Oh, that's what this book is about."

And then? The pandemic hit, and it quickly became apparent that whatever plans had been in the works would need some nimble rethinking.

"Many of our families who had been able to participate in summer programs before had very different concerns this summer—either about their health and safety or their economic situation. So, we knew we needed to create a way to interact with the families directly."

Out of that necessity, the very cool THIS BOOK IS COOL! program was born, and what was originally a summer reading program for the Suncoast counties is now being offered as open-source material for anyone, anywhere—families, teachers, daycare centers—who want to use the material.

The centerpiece of the program is a series of 100 webisodes designed to encourage a love of reading. Libraries of webisodes for each grade, PreK through third grade, feature books specially selected by an engagement team composed of teachers, volunteers with the Campaign for Grade-Level Reading, reading specialists, and parents. Duda asked each person to provide a list of 20 books that they would recommend to any child. In addition to those lists, the team researched not only Caldecott and Newberry Award winners, but Coretta Scott King Award-winning books, award-winning science books and any others they thought might provide the just-right material for the region's diverse population.

"It was important to us that if you held up a crayon and said, 'This is the color of my skin,' you would see yourself reflected in our selection of books."

"By the time we went through that process, we had quite a rich list. Next, we have a very robust Mind in the Making program here, so we did some research to source its Skill-Building Book Tips for each of the books that align with the executive function skills we're promoting with Mind in the Making."

Then, it was time to start shooting the webisodes. Each webisode features a special guest sharing their reasons why the featured book is cool. Duda's team felt it was important not only to have someone who could discuss the book, but with whom the children and families could connect.

"Because of the abrupt way our school closures happened, children left for spring break thinking they would be coming back to school the following week, and then they never came back to school," Duda says. "We were hearing from many of the teachers and families that they were feeling this odd sense of non-closure. Even if the children were seeing their teachers virtually, it wasn't quite the same thing. So, we wanted to make sure some of the guests were highly recognizable to the children.

"One strategy was to identify special teachers, principals, and assistant principals who would have high visibility with everyone in the school. We also wanted this program to be engaging for adults. We recognized that we had an opportunity to broaden the feeling of community by inviting other members of the community to be guests on the show."

Guests included a local meteorologist, an astronaut, the chief of police, and one of the principal dancers of the Sarasota Ballet as well as staff from several local museums, the Selby Botanical Gardens, and different cultural venues and offerings in the region.

Duda hosted the webisodes, her husband, Bill Wagy, served as director and lead editor, and another Suncoast Campaign for Grade-Level Reading Engagement Team member, Kelli Karen Smith, put her experience as an Actors' Equity stage manager to work and created a shooting schedule that allowed the team of three to tape ten episodes in a five-hour day.

Each of the series' 100 webisodes is accompanied by supporting materials and offers an age-appropriate activity guide with step-by-step instructions for each featured book. One of Duda's favorites is the book Tornado, By Betsy Byars and Doron Ben-Ami, about a dog who was found during a tornado, with local meteorologist John Scalzi as the special guest. The activity was to create a tornado in a jar, and Duda says her inbox has been full of photos and videos of children swirling liquid in jars to get the vortex circulating.

Another was the book More-Igami, by Dori Kleber and G. Brian Karas, with special guest Kuniko Yamamoto, a local origami artist. She did a family event in which she led families who have been participating in THIS BOOK IS COOL! in the folding of a really aerodynamic paper airplane.

"Mine flew further than any paper airplane I'd ever folded before," Duda says with a laugh. "It's been so much fun to see the families on social media posting pictures of them flying their paper airplanes. I got an email from one mother who said her house was now full of paper airplanes, and in parenthesis underneath, wrote, 'And I love it!'"

The Patterson Foundation fully funded THIS BOOK IS COOL! Duda secured enough copies of the 100 books selected so that each child who participated from home in the summer reading program received two books for their grade level each week. Duda thought originally that they might have 500 children participating but quickly discovered that more than 1,000 kids had enrolled in the program causing the team to scramble to increase the orders of books.

The families could pick up books at a number of community locations that agreed to partner with the program, and if their circumstances prevented that, Suncoast team members who lived close would drop off the books to them.

"We developed THIS BOOK IS COOL! to increase our family and community engagement in the overall campaign for grade-level reading. We didn't want it to be just a book drop off or 'Here's your free stuff,' but an opportunity to have conversations with the family, to see what their situation is and how they're doing.

Duda says her team is continuing to look at how they can leverage the material to be deeply useful to families and caregivers in these extraordinary times. Some of the books have a strong emotional-learning component, she says, and the team is considering putting together lesson plans that area church groups and providers might be able to use for family engagement. They're also looking at using some of the webisodes to help develop early learning skills and offering them through mothers' groups, local health clinics, or local WIC (Women, Infants, and Children) program offices.

Though Suncoast can't provide free books to others outside the community who access the webisodes, every community has foundations and organizations that might be able to support the effort to put books in the hands of the community's children. Duda says she studiously kept the books' price at or under $4 and sourced them through various providers, including Scholastic, First Book, and the Bulk Book Store.

Though THIS BOOK IS COOL! has undergone a few changes from the original plan, its transformation is the kind of inspiring, spontaneous solution that communities throughout the nation are inventing to keep learning happening and children and families served in the worst of times. For Duda and her team, there was no question that they would rise to the occasion.

"We had to do something," she says. "We couldn't just sit and watch. We knew we needed to take action, so we did."