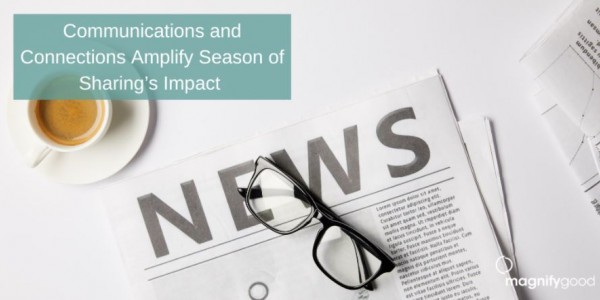 Posted on April 20, 2021 by Chris Hall, communications coordinator for MagnifyGood

For more than two decades, Season of Sharing has served as a trusted resource for those struggling to make ends meet throughout southwest Florida. All funds raised through the campaign go toward helping people cover crucial expenses for basic needs, such as rental assistance, utility bills, child care, or transportation. The program has assisted more than 35,000 families and individuals since 2000.

Amid a global pandemic and tumultuous economic conditions, the 2020-21 Season of Sharing campaign shattered fundraising records. The Patterson Foundation matched every $500,000 the community raised with $100,000 matching gifts. In just a few months, Season of Sharing raised over $3.7 million, including $600,000 from The Patterson Foundation — a record amount for the campaign.

The overwhelming success and impact of Season of Sharing would not be possible without an entire community coming together. One vital element of the success is the special partnership between the Community Foundation of Sarasota County and the Herald-Tribune Media Group that has powered Season of Sharing since its inception. Working together, both organizations utilized their resources to perfect the art of storytelling and undergirded with strategic communications.

MEDIA CAN CONNECT PEOPLE
Connecting with people through journalism and media is an effective way for a cause to spark donor support. Throughout the entire campaign, the Sarasota Herald-Tribune focused on stories that have touched the hearts of the community by publishing feature narratives detailing the struggles vulnerable members of the community are enduring and how Season of Sharing is putting them back on their feet. By publishing these powerful stories, readers can see the faces and connect with the challenges that people are experiencing.

While this coverage has been integral to Season of Sharing’s ability to connect with donors for decades, it was amplified by an innovation created through the Community Foundation of Sarasota County’s partnership with the Herald-Tribune. Ahead of the 2020-2021 campaign, the collaboration sought and hired a journalist dedicated to covering the community’s response and resiliency in the face of COVID-19. The resulting stories continued to introduce readers to the lives touched by Season of Sharing — including recipients whose finances and livelihoods were destabilized by the pandemic — while incorporating robust data and research illustrating the larger societal issues behind their dire circumstances, along with the work underway by regional nonprofits and community groups to address them.

The emphasis on examining the root causes of the challenges facing Season of Sharing recipients and the efforts supporting their recovery enhanced the message and scope of these stories. Beyond their immediate impact, they laid the groundwork for continuing coverage exploring the bigger picture of the pandemic’s toll on the region — elevating the dialogue among community readers and establishing Season of Sharing as an asset for those in crisis. Future iterations of the campaign can tap into the community’s heightened understanding of the issues and their solutions to drive donations.

COMMUNICATIONS ALIGNMENT MATTERS
Season of Sharing fundraising milestones and contributions by The Patterson Foundation were planned and announced via strategic communications. As a result, the campaign’s momentum increased as news of the fundraising and matches were covered by newspapers, magazines, television, and radio stations in the greater Sarasota region. In turn, this created more buzz around the campaign and inspired donor engagement.

The success of the Season of Sharing campaign can be used as an example for nonprofit organizations everywhere. Leveraging and aligning the combined efforts of partners with a strategic communications strategy and storytelling can maximize your reach and, more importantly, your fundraising.