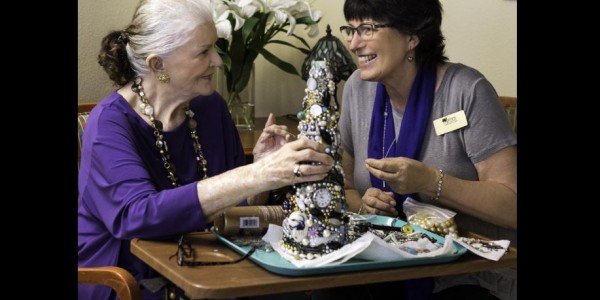 Many people think they’ve got assisted living facilities all figured out, but when deciding where to age, it’s important to be able to distinguish fact from fiction. The best way to figure out if an assisted living community is for you is to visit a few.

If you’ve ever referred to an assisted living facility as a nursing home, you’re not alone. People do it all the time. After all, they’re pretty much the same thing, right?

Not only is it factually incorrect, but it also has the potential to confuse older adults about what their options really are. Deciding it’s time to pack your bags and move out of the house is hard enough without misinformation running rampant. So, let’s try to clear the air on some of the most common myths and misconceptions surrounding assisted living facilities:

“So many people, at some point in their lives, grew up visiting a relative in a nursing home, and that feels like that’s all there is,” said Rosenthal. “But the world has changed significantly over the years.” Skilled nursing tends to be a much more hands-on environment that’s best suited for those with more complex medical needs. Sometimes it is used for short-term rehabilitation and other times for more long-term care.

Meanwhile, assisted living tends to be more focused on helping with activities of daily living, such as bathing, dressing, medication, and more. Residents also tend to stay there a while after moving in, as it’s not as commonly used for rehab, but instead as a safer and in some cases livelier alternative to their current living situation.

A common variation of this myth, according to Patricia McGraw, formerly of Brookdale Senior Living, is that assisted living communities are just prettier versions of nursing homes. Many picture skilled nursing facilities as dull and gray and see assisted living simply as colorful renditions of a hospital.

While it can be true that some skilled nursing facilities can more closely resemble a hospital, there are aesthetically pleasing versions out there, and the primary difference between skilled nursing and assisted living still comes down to the types of services offered. Skilled nursing is for those who require access to around the clock specialized medical care, while there can be several reasons for one to move into assisted living, which can include safety, help with tasks or even the social component of living in a community.

But the misunderstandings go beyond conflating assisted living with other types of setups. The idea that you’re not allowed to bring your pets is a big one that often stops older adults from making the move. Like any apartment or rental home, things like pets being welcome varies from place to place. Many assisted living communities are willing to accommodate your animals with a pretty standard pet deposit.

Two big myths, according to Amanda Harrison, vice president of business development at Pines of Sarasota, is that assisted living will take your freedoms away or make you feel isolated.

“People are afraid that some of their freedom will be taken away or maybe their environment will be restrictive, but it’s usually just the opposite. Older adults who live alone often tend to start isolating themselves as things become different. Maybe they become scared to drive or going to do things becomes too taxing. But then they move into assisted living, and they have help with transportation, they have friends right next door, and better access to community events. What you find is that their socialization actually increases overall, and the quality of life is better than it was at home isolating themselves in their house,” said Harrison.

For the record, you can also bring your car along and continue to use it, so long as you can safely operate it.

But perhaps the biggest misconception, according to Rosenthal, is that all assisted living facilities are all the same.

“Assisted living can be all kinds of things. To think otherwise is like saying all apartment buildings are the same. Some have minimal amenities, and then others are like cruise ships only on the ground, with everything from food options and happy hour at the bar to athletic facilities and fitness centers. Which one is the best for you is going to depend on who you are and what you like. But the best way to break the myths is to go and visit some of them,” said Rosenthal.