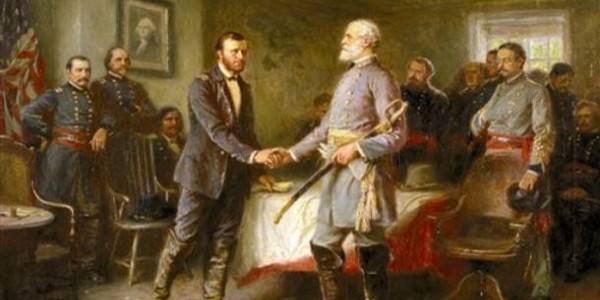 Commemorating a day for peace and connection following the Civil War

April 10 marks the first full day of peace and the re-establishment of brotherhood between North and South, Union and Confederate, Yankee and Rebel following the U.S. Civil War. Today is about community, about building connections, realizing common bonds, communication, and networking. Essentially, today reflects many of the values of The Patterson Foundation’s work!

Lt. Gen. Grant, a man in a position of dominance offered a pardon to all the Confederate Army, allowed them to keep and maintain their personal equipment and horses, and to retire on their own accord (after being fed with Union food supplies) to their homes in peace. His actions are reconciliatory and not punitive; they connect through commonality the long lost brothers of our nation.

I think this reality is best realized through Lt. Gen. Grant’s own chiding remarks to his officers and the shushing of his band as they erupted in celebration after the official surrender.

Grant told his officers, "The war is over. The Rebels are our countrymen again."

This war was not ending in victory, it was ending in a new reality, a reunification of family and the first step into an unknown and limitless future.

Here are the words from that day:

In accordance with the substance of my letter to you of the 8th instant, I propose to receive the surrender of the Army of Northern Virginia on the following terms, to wit: Rolls of all the officers and men to be made in duplicate, one copy to be given to an officer to be designated by me, the other to be retained by such officer or officers as you may designate. The officers to give their individual paroles not to take up arms against the Government of the United States until properly exchanged; and each company or regimental commander sign a like parole for the men of their commands. The arms, artillery, and public property to be parked and stacked, and turned over to the officers appointed by me to receive them. This will not embrace the side-arms of the officers, nor their private horses or baggage. This done, each officer and man will be allowed to return to his home, not to be disturbed by U. S. authority so long as they observe their paroles and the laws in force where they may reside.

I have received your letter of this date containing the terms of surrender of the Army of Northern Virginia as proposed by you. As they are substantially the same as those expressed in your letter of the 8th instant, they are accepted. I will proceed to designate the proper officers to carry the stipulations into effect.