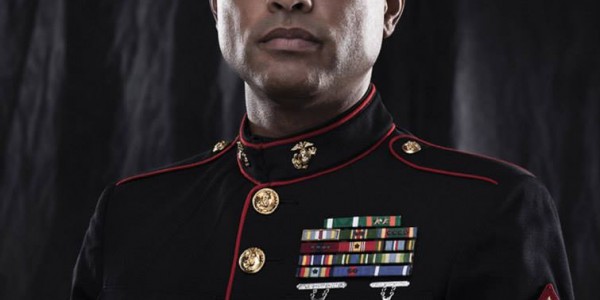 Citizenship Day has special meaning for Legacy of Valor hero

There are two paths to earning citizenship in this way. The first path is through serving in the military during peacetime. This service grants exemptions to certain requirements of the process to include residency and physical presence in the United States.

The second path is through military service during periods of hostilities. This path was created by executive order in 2002 and allows servicemen and women to immediately file for citizenship during or after they have honorably served in the military and deployed into designated hostile conflicts.

One of our Legacy of Valor heroes, Master Sergeant (Ret.) Edward Valdez, originally from the Dominican Republic, gained his U.S. citizenship six years into his 20 years of service in the United States Marine Corps. He studied for the citizenship and naturalization exam extensively but does credit his Marine Corps Sergeant's uniform for assisting during the testing process.

He celebrated his citizenship by serving another 14 years in the Marine Corps and has now dedicated himself to assisting veterans as they realize higher education goals through his work at the University of South Florida.

I had the opportunity to ask him what advice he would give to young servicemen considering attaining citizenship and this was his response:

"The best advice I can give anyone thinking about becoming a citizen is that, when you become a citizen of any nation, you must remember to obey the rules and regulations of that nation, the nation should not have to change to please your desires."

His wise words reflect a lifetime of selfless service to our country and are a great credit onto himself as well as inspirational to me.

The Legacy of Valor campaign is always interested in inspirational stories such as that of Edward Valdez. If you have a citizenship story please share it in the comments below!