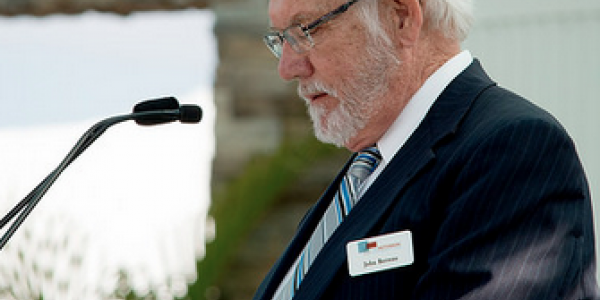 Nearly five years in the making, The Patterson Foundation's Military Initiative encompasses what it means to honor veterans, inspire patriotism and embrace freedom. From the first-ever Patriot Plaza at Sarasota National Cemetery to the Veterans Legacy Summit bringing support for veterans and their families to life, here's a look at what Chairman John Berteau shared with national dignitaries Nov. 15, 2014, in Sarasota.

As honest Abe said a few minutes ago, Jim Patterson's great-grandfather, Joseph Medill, helped Abraham Lincoln become the elected president during one of our nation's most trying times, and it was Abraham Lincoln as president who set the pattern and spirit for our national cemeteries. As he said and as incorporated on the Patriot Plaza entrance wall: to care for him who shall have borne the battle and for his widow and his orphan --- to do all which may achieve and cherish joint and lasting peace among ourselves and with all nations.

To secure such a peace, Joseph Medill's two grandsons, Col. McCormick and Capt. Patterson, served in the United States Armed Forces in World War I. A generation later, Capt. Patterson's only son would graduate from the United States Military Academy at West Point and serve his country honorably in World War II. He married Dorothy Clarke and it was Dorothy Clarke Patterson who created The Patterson Foundation. I had the privilege of knowing Dorothy Patterson for more than 20 years. She was a lady of vision and strong values. A number of years ago, when Dorothy Patterson created the foundation, she imposed no restrictions, no limitations on the foundation. Subsequent to her death and full funding of The Patterson Foundation in 2009, the board has kept to her philosophy of no restrictions.

Unlike most foundations, The Patterson Foundation has no grant applications and no grant cycles. We do participate in charitable partnerships, which continue for a relatively long time. They are partnerships that are innovative, transformational and sustainable.

Patriot Plaza is an example of such a partnership. Here, The Patterson Foundation demonstrates innovation.  Never before has there been a public-private partnership such as the partnership between The Patterson Foundation and the U.S. Department of Veterans Affairs National Cemetery Administration. When a large, charitable organization partners with a large government, such as the Veterans Administration, what could go wrong? Well, they might finish it just in time for the community dedication on what turned out to be the hottest day of the year. Despite the challenges of being the first private organization to build a monument to the service of veterans and their families in the National Cemetery, The Patterson Foundation is proud to have been an innovator and to have created this magnificent tribute, Patriot Plaza.

A few years ago, this was just a cow pasture. Look around you at this magnificent structure, the patriotic artwork and feel the touch of the heart warming photographs. We are sustainable. The Veterans Administration will provide for the maintenance.

The Veterans Administration will provide for the maintenance. The Patterson Foundation has created an endowment of $1 million in perpetuity for the rejuvenation of Patriot Plaza.

Here and today we honor the sacrifice of our veterans and their families. But what is the meaning of their sacrifice? Pulitzer Prize-winning author Rick Atkinson in his trilogy of World War II quotes a rifleman in the hundred and 57th infantry upon seeing a concentration camp said, "I have been in the Army 39 months. I have been overseas in combat for 23 months. I gladly would go through it all again if I knew things like this could be stopped."

This national cemetery is a place to inter our honored veterans and their families but it is also a place to recognize and reflect upon their commitment to democracy, freedom and the greatest ideals of America.