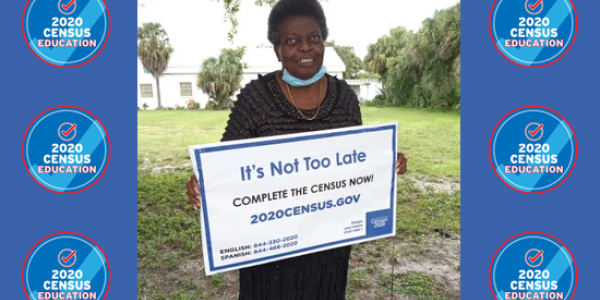 In Sarasota, Newtown Advocate Takes Census into Her Own Hands as Deadline Nears

Editor's Note: Given the repeated changes in policy, it's prudent to assume that anything can still happen. For now, the Census 2020 deadline is October 31.

For Valerie Buchand, voting and participating in the census are more than civic duties – they're acts of hope.

Buchand, who serves as president of Newtown Nation, has been hard at work spreading the word about the deadline to complete the 2020 Census and encouraging residents to vote in the upcoming election.

She's planted dozens of signs, created an informational video, and regularly made rounds in the neighborhood, handing out pamphlets and cards with instructions on how to participate.

"Everything we do surrounds injustices," Buchand said. "Standing up for folks' rights and bringing solutions to problems that have existed for a long time."

The coronavirus pandemic made it difficult for the U.S. Census Bureau to find enumerators and urge people to self-respond. After requesting an extension of time, the bureau ultimately cut four weeks from its schedule – bringing the deadline to September 30. (They've recently extended the deadline back to October 31.)

Though not a census worker herself, Buchand understands the importance – and challenges – of achieving a "complete count."

As of October 2, 97.2% of Florida households had responded to the census either on their own or through enumerators — Florida is ranked 41st out of all states. In Sarasota County, 65.2% of households had self-responded – compared to 63.5% in Charlotte, 59.3% in Manatee, and 47.1% in DeSoto.

The census determines the state's representation in the U.S. House of Representatives, the size of state delegations for the 2022 House elections, and state votes in the electoral college for the 2024 presidential election.

It also allows state and local leaders to help redraw congressional, state and local district boundaries as well as drives the planning for infrastructure and public services, like roads, hospitals, and schools.

An accurate population count also affects how more than $1.3 trillion in federal funding is allocated each year to state and local governments, individuals, and organizations.

"The government puts things in place to help residents, but then at the same time, they also put things in place to keep them in bondage," Buchand said. "So Newtown Nation is saying, 'OK, we need to unravel this.' Little by little, we're trying to make that change so that our community can be sustainable."

Her whole life, the 63-year-old has lived in Newtown, a community still reeling from the effects of redistricting.

In November 2019, Sarasota County commissioners voted to move the historically African American neighborhood from District 1 to District 2, eliminating its ability to vote in county commission races until the 2022 election.

The move prompted a federal class-action lawsuit alleging violation of the Voting Rights Act of 1965. A federal judge later dismissed the case, concluding that the move was driven by "hardball partisan incumbent protection," rather than skin color.

Buchand understands why her fellow neighbors might have lost faith in the government that's supposed to represent them. She says it's common for people to tell her they're skeptical of the government or worried about their information being used against them.

"Right now, to them, it just seems like a hoax," she said. "But I have hope for Newtown … I believe that we're going to succeed and rise. And there are people that don't want to see that happen, but when Newtown residents see that a change is coming for good, then we're going to get more people engaged."

The census can be completed online, by mail, by phone, or through an enumerator who goes door-to-door to follow up with households that haven't responded. It does not collect information that can be misused, like Social Security numbers, and responses are confidential for 72 years.

Though not a Newtown resident, Ellen Heath was struck by Buchand's work and wanted to get involved. Recently, the two just finished up a round of getting the word out.

"(Buchand) has a heart, and a lot of people know this," said Heath. "People come to her because they know that whatever she does, she puts her whole heart in it."

Venice resident Kindra Muntz says she started attending Newtown Nation's biweekly Zoom meetings at Buchand's invitation. She said Buchand is deeply concerned about comforting people and raising their self-esteem, and that she brings a "wonderful sense of support to so many people."

"Your vote matters," said Muntz. "It always matters, and it is critical. You might be the one vote that makes a difference between the person that you believe in, losing."

If everybody in Newtown voted and completed the census, Muntz continued, city and county commissioners would "wake up" and recognize the influence that their voices carry.

"These people are a force," she said. "We need to listen to them, and we need to do right by them."

To complete the census, visit www.2020census.gov. Census 2020 special coverage comes from Aspirations Journalism, an initiative of The Patterson Foundation and the Herald-Tribune to inform, inspire, and engage the community.