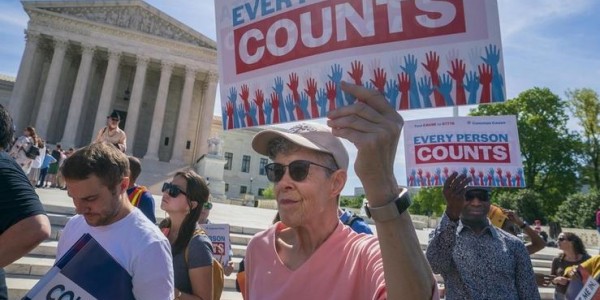 Census 2020: Questions answered about the census

Worried about privacy? Wonder why you should bother? Is there a citizenship question?

[You can fill out the census at my2020census.gov.]

Who gets counted by the census?
Everyone in the United States, regardless of citizenship or immigration status, should be counted.

How often do I need to complete the census?
Though the Census Bureau conducts many surveys and studies every year, the national census only happens every ten years.

When was the first census?
August 12, 1790, about a year after George Washington was inaugurated as president. It was directed by Secretary of State Thomas Jefferson and executed by marshals from each judicial district.

Why do we have a census?
The U.S. Constitution requires it in Article 1, Section 2, so that the federal government can apportion representatives and funds to states according to their population.

Why should I complete the census?
For a lot of reasons. It’s the law. It determines how trillions of dollars are distributed by the federal government to states and communities. It determines how many representatives each state has in the U.S. House. It helps businesses make decisions about where to open stores, offices, factories, and much, much more.

When does the census start?
It has already started, with some areas of Alaska counted in January. For most people, however, mid-March is when they will receive a notice from the Census Bureau with instructions for completing the census online or by telephone.

Can my answers on the census be used against me?
No, nothing in your responses, not even the fact that you responded, can be used against you in any way. The law requires the Census Bureau to keep all responses confidential, even from other government agencies, law enforcement, and the judicial system.

If census records are private, how do people use census records for genealogical research?
Although the law requires that census responses be sealed and cannot be used against you by the government, courts, or law enforcement, the records are made available to the public after 72 years have passed. That means the most recent census you can access to see individual records is currently 1940, and in two years, the Census Bureau will release 1950. There are a variety of online sites that can help you search them, but the best place to start is the National Archives at archives.org.

What information do I have to give the census when I fill out the form?

Who should I count when I complete the census?
Everyone who lives in your home, or stays there most of the time, even if they are not family members.

Even children?
Especially children, no matter their age. Children are one of the most undercounted groups in the census, so be sure they are counted.

What will not be asked by the census?
The Census Bureau will never ask for:
When do I have to complete the census?
As soon as possible, ideally. Since this is the first year you can complete it online, it should be easy to complete. If you can’t or prefer not to do it online, you can also complete it by telephone or by mail. If you haven’t responded by the end of April, the Census Bureau will send someone to your home to help you complete it. 2020 Census Operational Adjustments Due to COVID-19.

How can I help make sure people in my community are counted?
The simplest thing you can do is talk about the census to your relatives, friends, neighbors, clients, people in elevators, or people you pass on the street. You can also go to 2020census.gov, where they have downloadable images and ideas for spreading the word through social media or by email. After you are done reading this, make sure to give it to someone who hasn’t seen it.

Where do I go to learn more about the census?
First stop is my2020census.gov

Census 2020 special coverage comes from Aspirations Journalism, an initiative of The Patterson Foundation and the Herald-Tribune to inform, inspire, and engage the community.