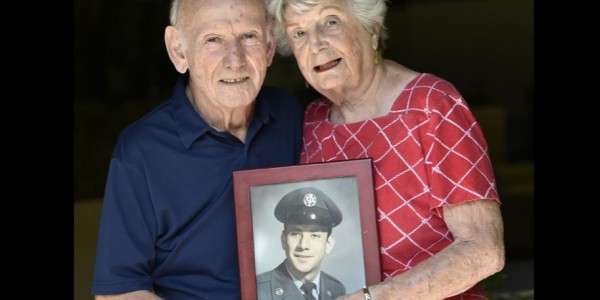 Caregivers Often Forget to Care for Themselves, but There Is Help Available

The Caregiving Place, a resource center for caregivers located at the Friendship Centers, offers programs for those who provide care such as weekly support groups and the Adult Day Service, which gives care providers a much-needed break.

Cathy DeGeorge might have one of the most challenging, overlooked, and underappreciated jobs there is, but you would never know it from her energetic, dogged, can-do personality. It doesn't pay, and there are no real days off, but she shows up and does the work. And even though it can wear on her patience from time to time, she isn't going to quit anytime soon. It's a labor of love.

Caring for her husband, John, has become a full-time job since he was diagnosed with Parkinson's disease in 2012. The path forward since that day hasn't always been easy, but it's been worth it, according to Cathy — because while a lot of things have changed in the past seven years, a few things have not: they're still happy, and they're still in love.

Being an informal caregiver, or someone who is unpaid and assists a family member or friend with daily living or medical tasks can be a thankless job riddled with difficult decisions, frustrating circumstances, and heartbreaking moments.

It's like constantly thinking for two, Cathy says, which is difficult because no matter how hard you try, you're still just one person.

But she's up for the task.

About 10,000 people turn 65 every day in the U.S. For the first time in U.S. history, there are more than 50 million people age 65 and older. A 2015 survey by the National Alliance for Caregiving and AARP showed that approximately 34.2 million Americans provided unpaid care to an adult age 50 or older in the 12 months that preceded the survey. Compare that to the 43.5 million who provided unpaid care to a child or adult under the age of 50 during the same period.

Eight out of 10 Americans see caregiving as "the new normal," according to a 2017 study by Merrill Lynch. But that new normal doesn't come cheap: informal caregivers provide services equivalent to roughly $500 billion per year, which is three times greater than Medicaid's expenditures on professional long-term care, and spend an average of 253 hours a month providing care, the Rand Corp estimates, which equals a 60-hour-a-week job.

Grace Whiting, CEO and president of the National Alliance for Caregiving, doesn't just see caregivers as "the new normal." She sees them as essential and irreplaceable.

It can take its toll.

Family members caring for relatives and sick spouses have higher rates of chronic disease, stress, and are at a greater risk for depression, social isolation, and financial loss, according to a 2009 paper published in the National Institutes of Health. It's so common that it's even been given its own name: caregiver stress syndrome.

A Stanford University study reported that 40% of family caregivers for Alzheimer's patients die from stress-related disorders before the person in their care.

Whiting said some of the research is mixed and that some studies have shown that caregiving may, in certain instances, actually increase health incomes by helping them feel closer to their family members and increasing their sense of purpose. With more complex illnesses, such as forms of dementia, health outcomes tend to be worse.

"There are a lot of factors at play when it comes to dementia itself; a lot of times the caregivers tend to be a little older in the first place, but when you compare people in those cases who are caregivers to their non-caregiving peers, typically they have worse health outcomes and more financial strain over time," Whiting said.

Cathy, now 85, met John, 86, during their senior year at Norwich High School in New York. It was love at first sight. They've been married 65 years. John DeGeorge is still the same guy she fell in love with all those years ago. He's still the same brilliant guy who, as an engineer for then Grumman Aerospace (now Northrop Grumman), helped work on the B-2 Spirit (better known as the stealth bomber), the F-14 Tomcat, and the Apollo Lunar Module.

Still, there have been changes. Tremors sometimes cause him to shake. He has trouble remembering names and is more forgetful. There's a blank look on his face that was never there before the disease took hold. Most of all, he's dependent on Cathy.

"The biggest hurdle is just the fact that you are taking over. You're now the party in charge, and you're totally responsible for everything," Cathy said.

That has meant taking over the finances, making sure there is food on the table every night, and helping John with what used to be simple tasks, like making sure he is dressed. It also meant selling the family home and downsizing into an apartment despite her husband's initial reluctance.

But most of all, it meant accepting help when help was needed, which is why she drops him off at the Friendship Centers' Adult Day Service at 9 a.m. and picks him up at around 3 p.m. most days. The Adult Day Service is where caregivers can go when they need a break.

It offers programming that caters toward those experiencing cognitive or medical issues while giving caregivers the peace of mind of knowing that they have somewhere where their spouse or relative will be taken care of by qualified professionals. This gives them some time to focus on themselves and maybe get out of the house, something that becomes an increasingly rare occurrence for those providing care, according to Paula Falk, director of caregiving services at the Friendship Centers.

"People get to the point where they can't leave someone alone, and you become a prisoner in your own home. The person they're caring for is stuck there, too," said Falk. That's when you have to take a look at what solution works best for you," according to Falk, "whether that's something like an in-home care service or, in Cathy's case, an adult day service program.

Programs like the one at the Friendship Centers can also provide a change of scenery for those receiving care. Isolation is one of the biggest contributors to depression in those 65 and older, according to many experts, and day services give them a chance to connect and socialize with others while enjoying healthy meals and participating in activities like art therapy, discussion groups, and games.

In addition to the adult day service, Friendship Centers' The Caregiving Place offers weekly support groups, which focus on connecting those providing care with others in similar situations. This gives them a chance to learn from people who might be in different stages of the caregiving process, according to Falk, while also allowing them to vent, receive emotional support, and make new friendships in the process.

It also offers an educational series of classes called Powerful Tools, which aims at equipping caregivers with skills and coping mechanisms that can help reduce stress and negative emotions.

"I think a lot of people think, 'hey, this is my job, I should be able to do it' and almost think something's wrong with them if they can't do it all by themselves, but that's not the case," said Falk. "There's help available, and people need to know that and take advantage of that."

The Caregiving Place is, after all, a place that's all about teaching caregivers how to do the one thing they forget about too often: how to take care of themselves.

This fact isn't lost on Cathy, who has called the Friendship Centers a godsend for the help they've provided. It's allowed her to find her new normal and settle into a life where they are still happy and content despite John's diagnosis and the new challenges it provides.

While being a caregiver can be challenging, she considers herself lucky more than anything.

"You can't feel that you're being cheated just because you can't do some of the things you used to. That's just part of life," Cathy said. "We've had a wonderful life. It's not a chore. It's an act of love."