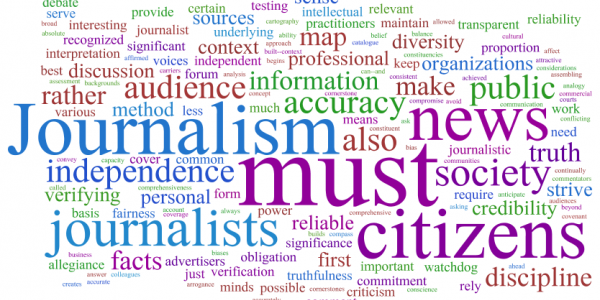 Building a future for independent journalism

In a little more than three weeks, about 100 independent local news publishers and those who support them will gather in Chicago for the latest incarnation of the Block by Block Community News Summit.

Block by Block has come a long way since the first gathering in September 2010, when Michele McLellan drew up an agenda based on what she learned about this growing group of new entrepreneurs during her fellowship at the Reynolds Journalism Institute.

We weren’t sure then how many people would come or exactly what they’d want to talk about – but we knew that there was a need for community among these publishers who were redrawing the face of very local journalism.

Michele had invited me along for the ride after I’d spent some time interviewing her at the beginning stages of my work in the New Media Journalism Initiative. Debra Jacobs, chief executive officer of The Patterson Foundation, and I had agreed that we wanted our work to focus on digital journalism, and we knew that we wanted to build connective tissue for entrepreneurs who needed to learn and grow together.

We couldn’t have found a better community for that exploration than the one that came together at that first Block by Block. The Patterson Foundation and its New Media Journalism Initiative have provided both financial support and our own organizational skills and capacity to help build the Block by Block event and its community. This year, the third summit will mark the end of our work in enabling the event. I’m filled with a sense of anticipation about how the community will continue to build on this base.

The first year, Block by Block was characterized by a sense of found connections. It was an amazing thing to watch these publishers, from cities and small towns across the country, recognize for the first time that they weren’t alone. Their sense of mission was a shared one, as were many of the seemingly intractable problems they faced in trying to achieve it.

There was something almost beautiful in watching them realize that they didn’t have to go it alone, that in helping each other they could reduce their pain points and accelerate their development. Combine that with their passion for serving their individual communities, and Block by Block 1 had a bit of the feeling of old-fashioned revival.

If the first Block by Block was a more spiritual experience, last year’s was all about finding hammers and nails. With another year under their belts, the publishers came ready to talk dollars and sense. Whether they were for-profit or non-profit in their approach, the general sense last year was that everyone needs a better business model – and they need it fast.

Between last year’s session and this year’s, The Patterson Foundation has been enabling a small-scale experiment in business mentoring with a group of 12 Block by Block publishers called Super Camp. Much of the agenda for this year’s summit is based on what we’ve learned from that. Beyond Block by Block, our learnings from  Super Camp are fueling the Community Executive Journalism Training program that the Investigative News Network is organizing for both investigative and community journalists in October.

We’ve also been working in these intervening months with a group of publishers focused on building an organization to represent the interests of the independent local news sites. We’ve provided organizational consulting and enabled meetings for these publishers as they’ve hashed through the complex issues of starting an association, from scratch, that will work virtually and cooperatively.

This week, the publishers have announced the formation of the Local Independent Online News Publishers, or LION. LION’s chairman, Dylan Smith of the Tucson Sentinel, told the Columbia Journalism review: “We don’t have the vast resources that big newspaper chains do, but we also don’t have the bureaucratic leadership that they do. We can choose a direction and pursue it. That’s why we think we’re the future.’’

I agree with Dylan; I think local independent news sites are a big part of a vibrant, inclusive future for local journalism. It’s been an honor to be present in the company  of these entrepreneurs as they continue to chart that future.