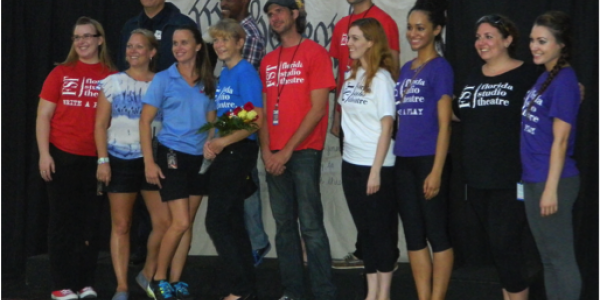 Posted on October 09, 2014 by Beth Duda, director of the Suncoast Campaign for Grade-Level Reading

The job of an educator is difficult — there is no doubt about it. They deal with a variety of children, each one with a unique personality and unique needs. They are tasked with teaching concepts in multiple subject areas, assisting in the development of various skills, and keeping a well ordered classroom. Add to the mix new Florida State Standards, new assessments that will demand more from the students, and seemingly not enough time to accomplish everything that needs to be done.

Now they are being asked to go to a website, EdExploreSRQ.com to find additional activities and explorations for their students to participate in. More? Really? How are they supposed to fit that in on top of everything else?

That, to me, is the beauty of Arts Integration. The teacher who regularly integrates art into the subject matter he or she needs to teach is able to accomplish more at a faster pace and have a great deal of fun doing it. Students can participate in an art form, which helps them gain important understanding about the art, and at the same time, the students learn material in other subject areas. It works.

This past spring, we worked with Brentwood Elementary School on a school-wide project. The students were given the goal of creating a show using the Social Studies curricula in the third, fourth, and fifth grades. Using arts integration techniques, we ended up meeting benchmarks and standards in Language Arts, Social Studies, Theatre, Music, Dance, and Visual Art. There was even a classroom or two that incorporated Math into their costume designs.

Students learned the words to the Preamble of the Declaration of Independence by singing and choreographing a hip hop song. Regions of the United States were used as inspiration for the students to write poetry and stories. The dance teacher at the school was able to tie different styles of dance to the various regions of the United States. Students developed plays about Henry Flagler and Liu Gim Gong, the inventor of the Valencia Orange. One class researched, wrote about and re-enacted Conquistadors landing on the shores of Florida. The performance spaces were enhanced by artwork created by the students, and backdrops made by teacher and parent volunteers.

The students were excited and enthusiastic about the show, which translated into enthusiastic student-driven learning. The goal of the show propelled the students to learn comprehensively. Their excitement caused the project to grow. Soon, we had parents helping to make costumes, and students volunteering to stay after school to paint props. They watched each other’s performances and gave suggestions for improvement. And then, finally, it was show time.

There was much celebration the evening of the performance and there were many, many compliments for the students for days afterwards. I’d like to share two of my favorite comments. A long-time teacher from Brentwood said, “The show was wonderful, and the students learned so much, but the most wonderful thing that happened is you made our school a team.”

The following day, I received a phone message from the aunt of one of the fourth grade students. She said, “The show was terrific, and the kids were great, but I want to bring something to your attention. These kids really learned something. My niece was able to tell me about explorers and their expeditions, it was amazing. You might think you just put on a show, but let me tell you, these kids learned a great deal.”