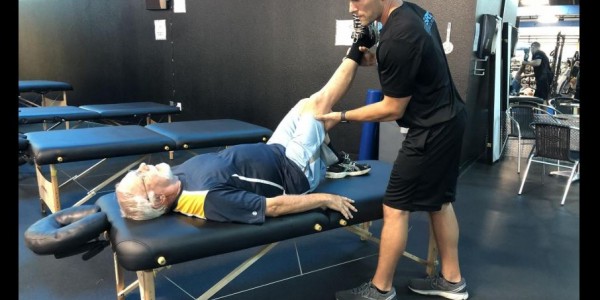 Aging in the Right Place: Exercise is a secret ingredient to aging well

Many health experts recommend taking up an active hobby as you age, such as tennis or running, to help you remain fit while retaining strength and stamina.

Exercise probably isn’t the key to immortality, but it might be the next best thing.

“The word is ‘active aging.’ If you’re not active aging, then you’re just aging,” said Sohni Epp, a certified personal trainer and medical exercise specialist, who is also a managing partner at Gym SRQ.

If you’re over the age of 65, odds are you might not be as active as you once were, and that’s OK. Many times wear and tear accumulates over the years and slows us down. But stopping completely can be a mistake, according to health experts.

“We find that a lot of weathered bodies tend to have the same aftermath. There’s the forward head position, constantly looking down. We see a lot of postural issues in the neck and upper back. The glutes melting into the legs, the stride shortening, and lateral movement is limited,” said Epp.

“Overall proprioception, or the body’s ability to recognize where it is in space, tends to deteriorate as does our ability to move confidently. And a lot of the time, that really limits you and what you can do.”

But these things are a normal part of aging, right?

While some loss of strength and stamina is to be expected as we get older, at least part of the loss generally attributed to aging may be caused by reduced physical activity, according to a report by the U.S. Surgeon General.

In fact, a 2018 JAMA Network Open study found that not exercising may be worse for you than smoking and could increase your risk of premature death more than having cardiovascular disease or diabetes.

Many experts see this as particularly troubling given that tendency to reduce physical activity as we age. Most figures indicate that the majority of older adults lead a mostly sedentary lifestyle. One 2013 study analyzing the prevalence of such habits among older adults found that almost 60% of those surveyed reported sitting for more than four hours a day, while 65% of them said they sat in front of a screen for at least three hours.

But as bad as inactivity is for you, exercising at any age seems to be an effective remedy.

Numerous studies point to immense health benefits associated with exercising, which include improved quality of life and even increased life expectancy. One study found that men and women in their 70s who regularly exercised had the equivalent lungs and hearts of people 30 years younger. A Brigham Young study looking at DNA samples of around 6,000 adults found that the telomeres, or molecular caps at the end of chromosomes that tend to get shorter as we age, were longer in participants who were active. Researchers reported that those who exercised regularly appeared to have a “biological age” of around nine years younger based on telomere length.

In other words, making sure you age in the right place might just come down to how often you can convince yourself to hit the gym, go for that walk or make it out to the tennis courts.

“It’s all about the movements you are performing every day. The body is malleable. If you are in the gym teaching yourself the correct habits and movement patterns, then life outside the gym and in your own home is going to be easier,” said Epp.