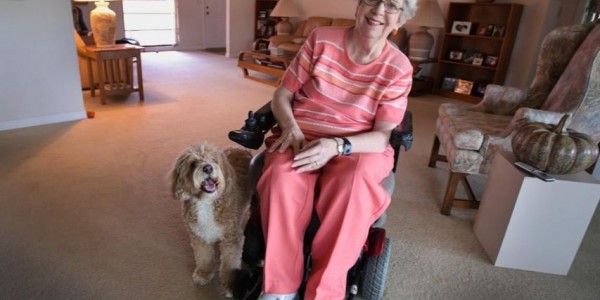 After a Slow Start, Home Share Project Ramps Up in Sarasota

Posted on May 28, 2019 by Timothy Fanning, Herald-Tribune Media Group

The program matches elders with space to spare with people looking for affordable housing.

Bill died on a Monday, weeks before his 91st birthday, 36 years after she told him, “I do.”

Grief washed over her, but so did mounting questions of how she’d keep her condo off Golf Pointe Way in Palm Aire. Money from her IRA account had to be stretched even more.

Her multiple sclerosis made it hard to walk without her power wheelchair. Derrenberger hadn’t worked in years. The future looked stormy.

Similar to others, Derrenberger, 72, couldn’t afford the rising cost of an assisted-living facility. Moving elsewhere was out of the question. She also didn’t want to give up her independence or Max, her 11-year-old cockapoo.

“I could keep my head above water if I had someone living here, sharing some of my costs, being there if something major happens,” Derrenberger said.

That’s why Derrenberger and a handful of other women and men her age wound up in the Friendship Centers pilot Home Share Program, which aims to take a bite out of the affordable housing crunch by matching older people with space to spare and full-time workers trying to make ends meet.

A year after the program began, Derrenberger is still waiting on a match. She’s not alone. Of the 34 seniors willing and able to open their homes, only four have found housemates.

That’s partially because, until a few months ago, the program was limited to full-time workers aged 23 to 40.

After the Home Share Program raised its age eligibility to 59, it started to catch on. The matches are coming in — with more on the way.

The Friendship Centers recently announced that there would no longer be an age limit, and that the program is open to anyone who needs housing. As long as you pass the background check, you also do not have to have a full-time job.

“One of the things we quickly realized was that, yes, 23- to 40-year-olds are in need of housing, but so are people outside that age range, many of whom are starting life anew because of a divorce, or a sudden shift in their career, or the death of a spouse,” said Evan Farrar, coordinator of the Home Share Program.

Home-sharing networks have existed informally in the local retirement community for years. And several co-sharing initiatives — where unrelated adults live in intentionally designed residences — have been pursued, only to fizzle because of financial reasons.

The Friendship Centers is a more structured attempt and the first here to be shepherded by an established nonprofit.

It works like this: The Friendship Centers recruits home providers and prospective tenants. Then it uses a detailed application process to find and facilitate potential matches. Once two compatible people are found, Farrar helps them agree on payment and living arrangements.

Limited to homes and condos in Sarasota city limits, the availability stretches as far south as Gulf Gate Estates and as far north as University Parkway by the Sarasota-Bradenton International Airport.

Through the Home Share Program, prospective tenants pay around $500 to $650 a month. The median rent for a one-bedroom apartment is $1,000 a month, according to Apartment List.

To qualify for the Home Share Program, applicants must pass a background check. To open your home, you must be over 60.

Individuals and couples cannot have children. Dogs, cats, and personal preferences often get in the way of finding matches.

The Home Share Program is not an emergency housing project and can often take months to find a match, Farrar said.

The wait didn’t bother Vanessa Simonard, 41, who works as a marketing and communications specialist for the Sarasota Yacht Club. Simonard moved into a home near Sarasota Springs in April.

“Evan really made sure that no stone was left unturned when he was looking for a match for me,” said Simonard, who has been co-sharing in various homes she found through Craigslist and word of mouth since 2017.

“With co-sharing a space, you really want to make sure that everyone is on the same playing field and everyone respects each other,” Simonard said.

Although Sarasota County encourages home sharing by allowing as many as six unrelated adults to live in one household, that concept has largely not taken hold because few people actually know that they’re allowed to do it, said Mary Anne Bowie, a semi-retired senior urban planner who heads the Jericho Project Inc., a local nonprofit that aims to develop permanent attainable housing solutions.

“Shared housing is the easiest way to plug the holes in affordable housing,” said Bowie. “It doesn’t require changing zoning regulations or building something new. It’s not rocket science and is literally something anyone can do.”

“It can be tricky to know if you’ve found the right person on Craigslist or through the people you know,” said Simonard. “That’s why what Evan’s doing makes a huge difference. It’s the value of knowing the person you’re with is the right fit.”

Derrenberger, who has been waiting since last summer to get a match, finally thinks she met the right person. The woman came to her condo earlier this month. Loved the house, and Max, too.