A Quest for Inclusion

Posted on July 06, 2022 by Michael Zimmerman, TPF Fellow 2021/22
I know what it feels like to be alienated and “othered,” and because of that, I am on a quest for inclusion. Coming from lineages of humans who have unfortunately experienced persecution, discrimination, hate, intolerance, and even extermination from the Earth fostered my keen eye for identifying injustice in all its forms. Reflecting on the recent decisions of the Supreme Court and Pride Month moved me to share this piece in hopes that hearts and minds may be opened just a little more to the lived experiences of “the other.”

My journey begins in a small town in Central New Jersey. At four years old in preschool, I knew I was different, and it was made abundantly clear by fellow preschoolers around me. I would ask, “May I sit here?” The table replied, “No! Act like a boy, and you can sit with us!” At this young age, I certainly was not equipped to articulate to my fellow preschoolers that excluding anyone based on gender expression was immoral. The only thought my four-year-old mind could articulate to my mother was that “kids were being mean to me for no reason.” Reflecting on the past, I see tremendous value in teaching children gender expression and sexual orientation as the intolerance had already been engrained at the mere age of four. 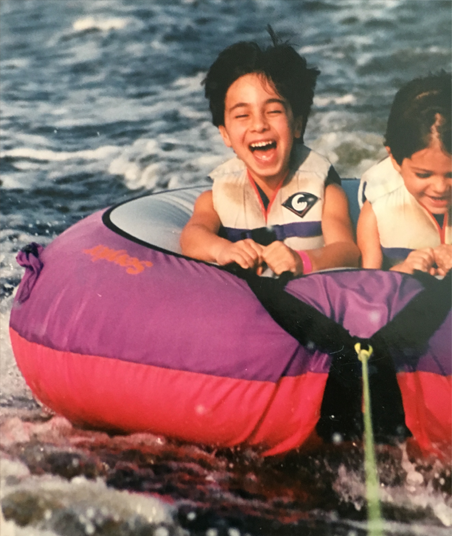 At this very young age, I quickly learned a hard lesson that would affect my life journey. My inclusion and survival were dependent upon “fitting in” and assimilating to heteronormative culture by “acting like a boy” to make it “more comfortable” for them, not me. This was the only path to acceptance in 1993.

This lived experience raises awareness around an injustice that for many has been normalized as “part of growing up.”

Learning from my lived experience of exclusion, is our society not ready for a higher standard of inclusion for all humans, even those who are different? Are we really going to support (and be proud of) laws that reinforce the challenges I faced in 1993 to perpetuate a repressive culture around inclusion?

From four to sixteen years old, I was fighting to simply live and breathe as me, but it was an uphill battle. Living in a culture of intense homophobia–built upon generations of unwillingness to understand the other–was running rampant in elementary, middle, and high school. My every move, word spoken, hand gesture, sport played, and more was carefully surveilled by an overwhelming mass of heteronormalcy who felt entitled to publicly announce any behavior with the slightest scent of “gay” or “effeminate” demeanor.

In this environment of harassment, bullying, bigotry, hate, discrimination, and exclusion, I struggle–to this day–to understand how a child can still be expected to learn, get good grades, build lasting relationships with peers, and ultimately grow to be a productive member of society. Does this environment strike you as one that stewards the intended mission of a school?

I couldn’t accept my experience growing up as a “societal norm.” It never felt right when I was told as a child, “Kids are just mean, and they are allowed to harass you for being gay.” I refused to normalize what I had been told as a teen, “This is as good as it gets, so keep your head down and wait for it to get better after you graduate high school.”

The very people who told me this were enabling the broader system of exclusion and inequity to perpetuate. I, along with many Americans, was failed by “the system.” But I remained hopeful to do something BIG about this when I grew older, to put a STOP to the failure.

As I became more immersed in my graduate studies at The Lilly Family School of Philanthropy, I discovered how my experiences of exclusion and inequity were actually systemic and affecting populations beyond those LGBTQ+. In fact, the inequities and exclusions affected gender, race, ethnicity, and other underrepresented and marginalized populations.

The inequities were far larger than my own experiences. When I made these realizations, I began to understand the system at large: Those who benefit from the system are less inclined to change a system that serves them well, nor seek to understand where, how, and why the system fails others. These inequities manifest in education, finance, climate, hiring, civic engagement, health and wellness, vital services, and beyond.

Why would someone who’s benefiting from the system want to change it and risk losing their benefits? Their motivation is to conserve it and keep it serving them. As long as they are taken care of, the rest will “figure it out” the same way they did.

We know that not everyone has equal access to the resources to “figure it out” the same way they did. This perspective and failure to acknowledge who and how the system fails “the others” is at the core of our country’s divisions. As fewer people are willing to show up with questions and earnestly seek to understand the system, the deeper the divide becomes, perpetuating a culture of excluding those that are “different” to grow and cycle through to the next generation. Is this our collective and shared aspiration for a more inclusive society?

Philanthropy innately values inclusion. Our organizational missions drive us to connect and learn from each other, hearing all voices and perspectives in our communities. How will we hold space for conversations around inclusion to educate those who are uncertain? Can inclusion be the pillar we all agree we deserve? Will communities raise the bar higher to ensure that today’s four-year-olds let all sit at the table to eat lunch? Will today’s 13-year-olds know it’s morally unjust to harass someone based on gender expression or sexual orientation?

Change happens at the speed of trust, and through meaningful conversations, trust can be built, fostering inclusive, accepting communities, making “the other” part of the greater. At the core of democracy is inclusion. Embracing our differences strengthens our society. I am on a quest for inclusion—for all humans. Are you with me?