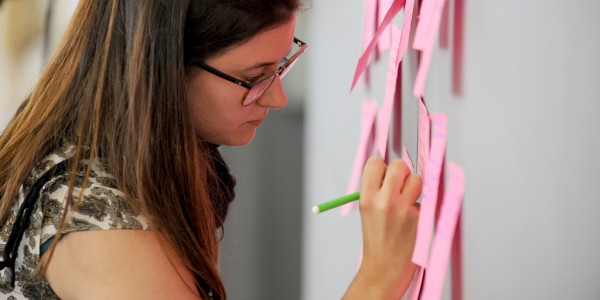 In August 2014, the two of us partnered to lead the Manatee County group for a new initiative of The Patterson Foundation -- Aspirations to Actions, which is a collaboration with The Harwood Institute for Public Innovation to develop public innovators in our region in Florida. It was a big commitment, but the power of the idea spoke deeply to our shared belief that engagement, involvement and enthusiasm from the people closest to needs and aspirations of communities generate success.

In both of our lives, we have seen the power of asking people what they want and shaping big plans with people rather than telling them what they need and doing things for them. So, we were both already passionate advocates for the philosophy The Harwood Institute and The Patterson Foundation represent, and we saw this initiative as a way to deepen and strengthen our own commitment to it and awaken leadership in unexpected places in the community we love (and learn in the process).

We put together a great Manatee County team, which includes:

*Catherine Ferrer - manager of fundraising, public relations and marketing for Suncoast Community Captial and an academic coach working with graduates from Bridges to Careers

*Amara Nash - supervisor of the Florida Maritime Museum in Cortez, Fla., and president of the Artists’ Guild of the Village of the Arts in Bradenton

Together, we attended a three-day training run by The Harwood Institute, an intense learning experience to guide us into conducting Aspirations conversations in the community. The goal was to find out what people we work with and care about most want their community to be and do, and then work with them to arrive at small ideas that could be accomplished readily, and see where all that might lead.

A vision of a multigenerational community

Initially, our team agreed we would generally address the issue of creating a community that would involve, include, and attract millennials. Although we represent every adult generation as a team, we understand that the vibrancy of our growing community will depend on continually creating a place where all generations enjoy living, working and playing in that space, and where no one is excluded. We don’t want to be a “retirement community” like so many in Florida. We want to be a great, diverse and lively city.

So we all set out to have “Aspirations to Actions” conversations. Already, several of those are leading to collaborative action, and there is more to come.

Most recently, Realize Bradenton celebrated the announcement of a major Knight Cities Challenge grant to support an idea Morgan developed with the staff of Realize Bradenton after discovering that the millennial groups with which she held conversations wanted creative, purposeful activities. They had no appetite for the bar scene or just hanging around socializing. They were looking for interesting, fun events that offered the opportunity to explore new ideas, or participate in worthwhile conversations that enhanced city life. With that in mind, the idea of “ReuseReCONNECT” emerged.

The ReuseReCONNECT project consists of a series of nine “Pop-ups for a Purpose” that will take place in downtown Bradenton. Each pop-up event will offer food, beverages and entertainment and will be grounded in specific civic topics, such as housing, mobility, employment, new restaurants, arts and culture, as well as health and wellness. Pops-ups will take place in cool and temporarily transformed existing spaces utilizing a re-usable “kit of parts” – modular street furniture, lighting, temporary public art, and other objects.

The goal is to connect a diverse group of millennials — professionals, artists, worker residents, musicians, tech workers, college students and under-engaged residents — and inspire them to greater participation in civic innovation, collaboration and leadership. Working with multiple partners and the millennial leadership team, ReuseReCONNECT will connect Bradenton’s younger generation and amplify their voices as civic innovators and leaders.

A final debrief of the series will lead to a digital product to share outward so others learn and build the millennial movement. ReuseReCONNECT will also be continuously featured in Realize Bradenton’s extensive place branding media channels, which reach 50,000 people a month in 50 states and 72 countries.

We truly believe the evolution of our team’s work this year, of which ReuseReCONNECT is a stellar example, is fulfilling The Harwood Institute's description of the characteristics of public innovators:

1. They have a deep affection for their communities and for tackling complex public challenges.

2. They are highly pragmatic, results-oriented and focused on getting things done. They have vision but are ruthlessly strategic in their execution.

3. They are willing to take risks and make big bets in their work. Most importantly, they understand which risks are worth taking and can manage that risk.

Our team is proud of ReuseReCONNECT, and thrilled to see a small idea with huge impact come to life … but stay tuned. More to come!