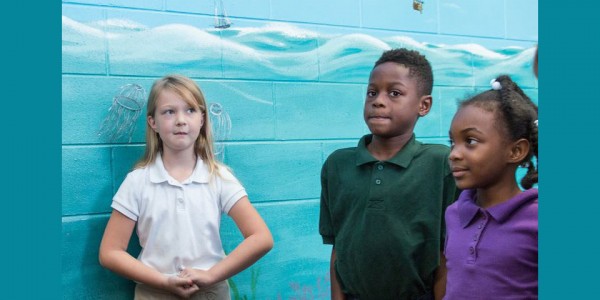 Editor's Note: Rebecca Freihaut is the Youth Services Librarian at Frances T. Bourne Jacaranda Public Library and a participant in the Harwood Public Innovators Lab underwritten by The Patterson Foundation for library leadership in Sarasota and Manatee counties.

I was about six years old when I started accompanying my social worker mother during the summers as she cared for families in a rural tri-county area about an hour outside of Louisville, KY. With our trunk packed full of government commodities (physical food that was delivered straight to families in need before the program went fully over to food stamps), we would drive down country roads, some of them gravel or dirt, to homes that were often barely livable. Vivid snippets of imagery still remains in my memory to this day — an elderly woman rocking on her front porch shucking beans, a baby with bowed legs covered in filth, an old rickety outhouse outside a home without running water, a frail mother with threadbare clothes who had obviously gone without meals to assure her children were eating enough.

The response of the families we encountered varied wildly, as you could imagine if you tried to put yourself into the shoes of someone who found themselves in a desperate situation. Sadness, embarrassment, frustration, and pride often mingled with thankfulness, gratitude, and relief. Being a curious child who never ran out of questions, I tried to process all the faces of poverty we were encountering. How did they get into this situation? Why can’t they just get a better job? Don’t they have any family or neighbors to help them? Do they want something better for themselves? Why aren’t we all doing something to help? Being an eternally patient person, my mother thoughtfully answered each of my questions, and as she did so, I began to understand that the complexity of poverty cannot be solved solely by one strategy.

Those discussions continued over a number of years, and ultimately shaped my worldview and my life as a whole. But as I headed into a career in librarianship, I leaned toward the world of academia, where I dealt mostly with the percentage of the population who were fortunate enough to make it to college. It was only as I changed gears and began my work as a public librarian did I realize my life had come full circle. I had become a person with the opportunity to be an agent of social change.

Not everyone who enters a public library is requesting social help, but the reality is that a significant percentage of patrons are in need. Just as I felt as a child, one can easily become overwhelmed by the magnitude of the problems that surround us. Where do we start? How do we bring about change? When I attended my first Harwood Institute session, I just knew they were kindred spirits. They too looked outward through the course of their daily work, and had the same desire for helping communities reach their aspirations.

Since I already agreed with the ideology behind their message, I wasn’t sure any new thought process would come from attending the workshops. Boy, was I wrong! The workshops allowed the aspirations from my childhood to be brought to the forefront of my daily life. Though I was already working diligently to help each patron as an individual, I began to once again think about the bigger picture. Over the months of training, Community Conversations, and Core Team meetings, I started to feel something rising up to the surface — hope. If all the problems in society are connected through a complicated web, is it possible to realize some of our collective aspirations through creating a new web based upon the ideals and goals we share?

I would venture to say that most people would like to help their community in some way, many just don’t know where to start. The Aspirations to Actions initiative in our community is the first step in connecting people toward collective aspirations. I can’t wait to see what the future holds in Sarasota!