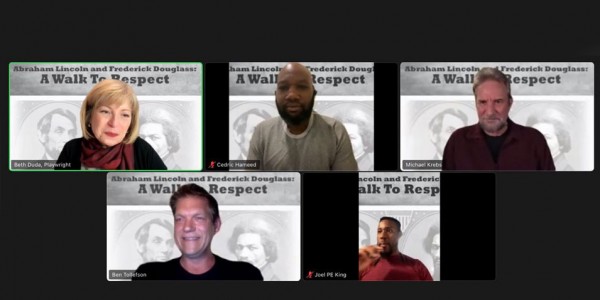 A Walk to Respect, Aspirations to Actions

Posted on January 26, 2022 by Stacy Sternberg, communications coordinator for The Patterson Foundation

In early 2020, in partnership with Westcoast Black Theatre Troupe, The Patterson Foundation produced a staged reading of a new one-act play, Abraham Lincoln and Frederick Douglass: A Walk to Respect — written by award-winning playwright Beth Duda, with original spoken word poetry by Cedric Hameed. The production captured by videographer Bill Wagy is being shared with audiences as a launching pad for meaningful discourse about our own personal "Walks to Respect."

In this production, Frederick Douglass, the black abolitionist leader and former slave, and Abraham Lincoln, 16th President of the United States of America, clash in their ideologies regarding race, politics, and slavery. Frederick Douglass, a true radical with a fiery spirit, believed in racial equality for everyone. Abraham Lincoln, cautious and considered, while opposed to slavery, was first and foremost a patriot intent on preserving the Union at all costs. These two self-made men faced their differences with courage and compassion, forging a friendship that helped to end the Civil War and reunite our nation.

The Patterson Foundation recently shared the play with an invited virtual audience of more than 200 individuals and offered a live panel discussion with the actors and creative team. This remarkable story of how these two powerful leaders faced their differences with courage, curiosity, and compassion inspired a lively and meaningful discussion. Participants drew parallels between the discord our nation was experiencing in the 1860s and now. Questions and comments generated during the panel discussion speak to the healing value of listening deeply and maintaining an open heart and mind.

The audience was moved by the similarities of these two men. Both were born into poverty, both suffered the early loss of their birth mothers, both were self-educated, and both demonstrated a great deal of courage in speaking their truth, engaging with others, and putting country before self as they strived for the common good.

Comments captured in the chat room during the panel discussion include "A powerful lesson in understanding each other's steps," "They shared a common passion of humanity….the approaches were different, but the respect for each other shined through," and "Both of these men stepped into the fiery furnace to make a change, without hesitation, without fear of endangering themselves, for the better good."

Ben Tollefson, one of the creatives involved in the production of the staged reading, served as a facilitator for the panel discussion. At Ben's urging, actors Michael Krebs, Joel PE King, Cedric Hameed, and playwright Beth Duda shared how working on the production left a lasting impression on each of them. The ideas of listening deeply, keeping an open heart and an open mind when speaking with each other, being curious about the life experiences of others, and never losing sight of the very real possibilities of hope and transformation were a few of the concepts they shared.

As a gift to the community, The Patterson Foundation is pleased to offer virtual screenings of Abraham Lincoln and Frederick Douglass: A Walk to Respect. Screenings are no-cost and include a link to the full-length recording and a live Zoom panel discussion with the actors and playwright to dive into the themes of respect, community, and civil discourse. The play is appropriate for ages 9+. Click here to schedule a virtual screening for your community or organization.