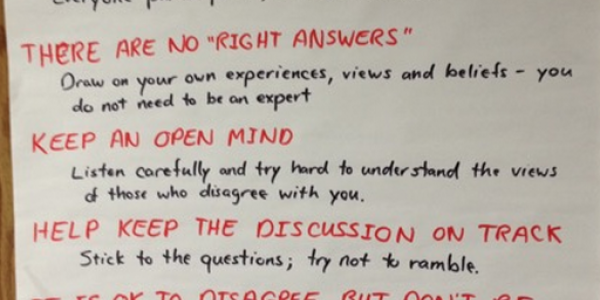 I’ve participated in three community conversations, so that now makes me an expert, right?

As a "guide on the side" for The Patterson Foundation's Aspirations to Actions initiative, I’ve spent the past few weeks learning how one of The Harwood Institute’s "turn-outward components"—Community Conversations—work. Here’s what I’ve learned so far:

- When two people have mentioned a topic, what can be learned by probing deeper?

- When one person is dominating the discussion with a judgmental agenda and others are only agreeing, how can broader participation be encouraged? (should I tell a joke?)

-The conversations that follow the end of the formal session are often richer than the the sentiments expressed during the conversation. Should it be captured?

- When participants are trying to solve problems rather than sharing their aspirations, how do I gently lift the conversation?

Note: There is so much to learn about being a good facilitator—it is not easy to keep your own experiences and perceptions canned. The good news is that the notetaker functions as a ‘silent facilitator.'

The Notetaker (aka the silent facilitator) participates quietly

- A few blurt out what’s on their minds, but these are rarely aspirations.

- Others think first. Many share they have never thought too much about aspirations or have never been asked about their thoughts.

- Once the conversations get going, the thoughts begin to flow.

Note: I found myself thinking about things I’d never put much thought into. Like other participants, It took me a few minutes to put thoughts into words, then I had to prioritize! Which is a higher aspiration—opportunity for all…or quality education for all? Fortunately, in two of the three Community Conversations, the leader allowed participants to share more than one aspiration.

- Be prepared for pregnant pauses at the beginning. Folks are used to being asked narrow questions, sometimes with pre-determined outcomes. They are not accustomed to starting a conversation with “What kind of a community do you want?” (This is the first of the 10 community conversation questions.)

- The Community Conversation sessions are designed for 12-15 participants and are based on the concept that a group of citizens sitting around the kitchen table with a neutral party will be able to talk more openly with less intimidation. In my limited experience, it makes sense as I’ve been in a large and a very small group. The large group made it difficult to explore ideas and perspectives. In a small group, it felt as if there weren’t enough ideas or perspectives to explore.

Have you participated in a Community Conversation? What are your thoughts?