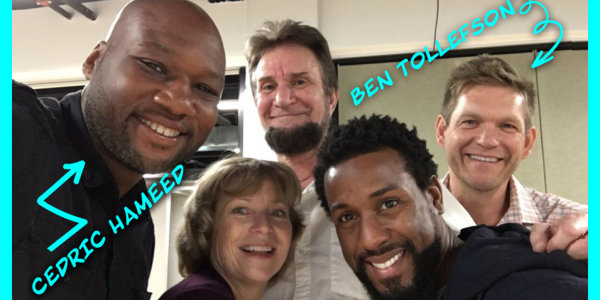 A Walk to Respect, Aspirations to Actions

Posted on May 03, 2021 by Benjamin Tollefson, Suncoast Campaign for Grade-Level Reading

It's hard to believe that just a little over a year ago, Abraham Lincoln and Frederick Douglass, A Walk to Respect was performed to packed houses all over Sarasota and Manatee counties. A lot has changed since then, but the spirit of the production has lived on throughout this turbulent year.

Since its inception, the theme of civil discourse (the mutual airing of views without rancor in hopes of creating greater understanding) coursed through the lifeblood of this show. Not only did the play itself highlight the communication between Abraham Lincoln and Frederick Douglas despite their differing views, but behind the scenes, during rehearsal breaks, the cast and crew discussed complicated ideas without simple solutions. Everyone's diverse knowledge base and unique backgrounds created fresh springboards for the ideas to bounce between. They were invigorating conversations that fed nicely into the work.

In continuing with the spirit of discourse, there was an audience discussion following each performance (including some virtual performances). Beth Duda (Playwright), Cedric Hameed (Poet/Narrator), Michael Krebs (Abraham Lincoln), and Joel PE King (Frederick Douglass) talked through the themes of the play with the audience. It was interesting to hear people's reactions and take-aways, but it felt like some folks had more to say.

So, when Beth asked Cedric and I if we would be interested in continuing the conversation by facilitating a discussion group, we both jumped at the chance. In truth, I had no idea what I was getting myself into, but I couldn't pass up the opportunity to work more with Cedric (one of the most inspirational people on the planet. If you've met him, you know what I'm talking about!) and explore ways of creating civil discourse within the community.

We decided on two tracks. Both would be discussion groups, but one would also have an added art component. We would have a weekly discussion initiated by a theme from the play (e.g., Family Ties and Educational Aspirations) and share our thoughts and personal experiences around that idea. We would end each session with a short writing exercise.

With relatively few technical difficulties (I mean, those little Zoom Gremlins will always muck up the works if you ever start feeling too confident), Cedric and I ran multiple discussion and art groups over the course of several months. The astoundingly talented Joel PE King (you may know that he does a mean Frederick Douglass, but did you know that he's also a fantastic visual artist?) was able to join us for some of the art sessions. Though we were discussing similar topics in all the groups, each conversation had its own unique life, and we never knew what path it would take. It was always a fascinating and rejuvenating ride.

The poems and artwork coming out of these sessions were insightful, surprising, and beautiful, but there was something else. Cedric and I would often talk after the sessions about how enriching each conversation felt. As I reflected on why this was so mentally refreshing, I thought of a quote that's often attributed to Eleanor Roosevelt, "Small minds discuss people, average minds discuss events, great minds discuss ideas." I think being cooped up for a year and seemingly always talking about people (mostly politicians and those that follow them) or events (there have been a lot of "never before seen" occurrences lately), it was a breath of fresh air to be in a space where we were discussing big concepts and relating them to our personal experiences. It pulled us out of the news cycle and created a connection (with mostly strangers) based on ideas rather than people or events. The conversations had a positive reverberating effect on me throughout the week (most participants echoed this sentiment).

The initial sessions are over, and honestly, I miss them. But more so, I am excited for whatever the next manifestation of this special project looks like. Maybe it's a virtual "salon" that helps share the extraordinary work created so far. Maybe it's something we haven't even dreamed of yet. All I know is that I can't wait to continue this exploration. So, grab your sneakers. Let's see where the next step on this walk will take us.