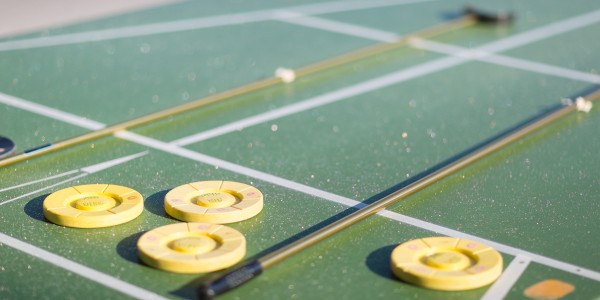 When a shuffleboard court is ready for play, it glitters.

I didn’t know this in October 2014 when I sat around a table with eight other millennials from the Bradenton area to discuss our aspirations for this community, but I’m glad I know it now.

That discussion took us all over the map -- from Lakewood Ranch to downtown, the beaches to north river. We talked about all kinds of topics: child care, living in fixer-uppers, wifi-enabled mini offices, the importance of strong coffee, and what else to do socially besides sit on a bar stool.

That last thing -- social options beyond the bar stool -- may seem like the least of our worries, but it has actually become the foundation for our solutions.

We focused on the concept of “smallify,” which was inspired by The Patterson Foundation’s Aspirations to Actions initiative and the Public Innovator’s Lab presented by The Harwood Institute for Public Innovation. We knew we would not be able to address the BIG stuff until we could work together on the “small” stuff first. Yes! Sweat the small stuff, just don’t sweat it alone!

With this in mind, Realize Bradenton approached the Knight Foundation’s Knight Cities Challenge with a project called “Pop-Ups for a Purpose.” The project sought to bring millennials together to design pop-up events that would activate overlooked or underused spaces, bring people from this age group to see the city with new eyes, and take action together.

One of these often-overlooked spaces was the Bradenton Shuffleboard Courts. After months of building positive relationships with club members, we collaboratively held the SHUFFLE! Pop-Up. While the crowd was primarily millennials, people ages 2-82 were in the mix.

The experienced players from the Bradenton Shuffleboard Club patiently and enthusiastically showed amateurs the game -- its rules, scoring, and strategy.

Conference attendees from the Manatee Millennial Movement’s (M3) #4Progress Millennial Con mixed with poets and painters from Village of the Arts over tacos. Bradenton-Area EDC thought leaders and Manatee Young Professionals members who had been at the courts the week before sprucing up the landscaping mixed with college professors, skateboarders and families with kids to “knock biscuits into the kitchen” in the parlance of shuffleboard.

The atmosphere was competitive yet friendly, laid back yet full of learning, bonding with the familiar yet bridging to the undiscovered. At the end of the night, the overwhelming sentiment was a question: when can we do this again?!

On Sat., July 2, a group of enthusiastic amateur shufflers took their places at the courts for the inaugural “Shuffle Social.” Once again, the magic happened - experienced players came together with diverse people from all generations and walks of life to enjoy some friendly competition.

While the courts technically glitter because of the silica sand-like “beads” that make the discs slide, I like to think the appearance of shimmering is enhanced by the connections - almost electric in their energy - that happen over social activities like shuffleboard.

We came together around this activity (a beginning!). We stayed together once it was over to explore the possibility of continuing (progress!) and now we’re working together to establish shuffleboard as a social hub in downtown (success!).

All that glitters is not gold, but for those who were at the table two years ago, we’re feeling pretty amazing about this.