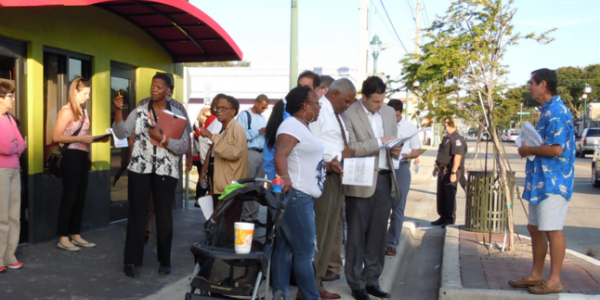 Editor's Note: Lorna Alston is one of our region's Aspirations to Actions public innovators and is the general manager of North Sarasota Redevelopment for the City of Sarasota.

Turning outward, literally moving from inside the closed walls of a meeting room to outside on the open streets, was the inspiration of the Dr. Martin Luther King Jr. Way Corridor Streetscape Project Walk.

The Dr. MLK corridor is the main artery of the Newtown community. We connected with citizens as we walked and talked. We used Community Conversation techniques, which we learned through our training with The Harwood Institute for Public Innovation, as a way to listen deeply to what they had to say. In the end, it gave us a reading of their aspirations for their community place.

More than 60 community citizens and stakeholders took the walk with Sarasota City staff and project consultants to share their thoughts of the preliminary conceptual street design. Together, we used our senses, rather than just codes and regulation guidelines, to provide direction as to how to incorporate the citizens’ visions and aspirations into the design.

As we walked and talked, we observed the human interaction to the natural environment. We heard about the history of when the corridor was a vibrant business district, lined with successful African American merchants, that was the lifeline for the community prior to integration. We smelled the aromas of barbeque chicken from local vendors. We touched each other on the narrow sidewalks. We saw the overgrown landscape and litter on the streets.

All of these insightful sensory elements turned into comments – public knowledge -- that the project team considered in finalizing the conceptual design. The community citizens were kept abreast of the project development during subsequent community conversations until we broke ground in October 2015.

As a result of the community’s involvement and by sharing their aspirations, the Dr. Martin Luther King Jr. Streetscape Project is anticipated for completion this Spring and will include:

This was an incredible experience for both the community citizens and the City of Sarasota’s project team. The community has taken ownership of this project as it unfolds, block by block -- seeing the transformation of their aspirations to actions.