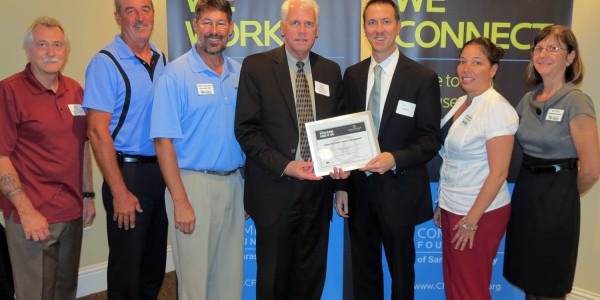 Posted on November 26, 2013 by Linda Gould, consultant with The Patterson Foundation

What an amazing monthlong campaign to support 12 community programs that are helping veterans and their families in Southwest Florida! The Unified Legacy of Valor campaign was a unique approach to fundraising using a 30-day window of opportunity -- or 744 hours -- for people to donate with matching funds available through The Patterson Foundation.

The collective focus of this was support for those who have served, are serving or may serve in our nation's armed forces. So while each nonprofit could raise funds for its individual programs, they all opted-in to collaborating as part of an umbrella campaign.

For a first time approach, this was hugely success with more than $273,000 raised overall. This was doubled by The Patterson Foundation with more than $546,000 benefiting veterans and their families.

Donations were made via GiveToLegacyofValor.org, as site created in partnership with The Giving Partner. From the first donation (which was received one minute after the campaign began on Oct. 15 ) to the last donation made 10 minutes before the deadline on Nov. 15, our community -- and individuals throughout the country -- stepped up to the challenge.

All 12 participating organizations are part of The Patterson Foundation’s Legacy of Valor campaign to honor veterans, inspire patriotism and embrace freedom leading up to the 2014 dedication of Patriot Plaza at Sarasota National Cemetery.

These organizations came together showing a true unity of purpose, supporting each other as well their own unique programs. Collaboration was the name of the game here as four Habitat for Humanity affiliates helped get the word out about their Veterans Repair and Build programs, their own and each other's! Individuals and organizations involved donated to each other to take advantage of the matching, how often does that happen?!

Rather than a competition, this was an incredible opportunity to come together and partner together with a common goal. New and existing partnerships formed, such as the Military Officers Association of Sarasota donating to USF Sarasota-Manatee’s new Veterans Legacy Scholarship to help veterans going back to school with gaps in their funding, along with volunteering to mentor student veterans.

Existing partnerships include that among Goodwill Manasota, All Faiths Food Bank and Jewish Family and Children’s Service, which share and partner on jobs, food and housing for veterans and their families.

Sarasota Military Academy educates and instills character in those who may serve.

Southeastern Guidedogs supports veterans through its Paws for Patriots program.

The Van Wezel Foundation garners support for its Military Access Program that enables veterans and their families to attend performances at the Van Wezel Performing Arts Hall at no cost!

There continue to be ways to help these organizations to honor our veterans every day with your time, talent and treasure. Get involved and visit FreedomPassItOn.org.