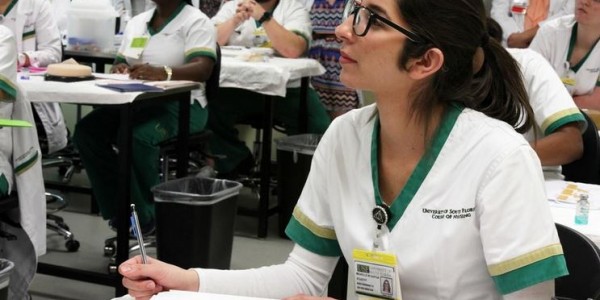 USF will offer an accelerated second-degree program that is expected to turn out 30 local nurses by 2021.

As applications for the University of South Florida Sarasota-Manatee’s new accelerated second degree program come in, the promise of bringing a new traditional four-year bachelor’s degree in nursing to the region is still evolving.

Last fall, the school enrolled its first freshman class in a two-year pre-nursing curriculum, with the final two years of study expected to be in place in Sarasota by fall of 2020.

Now, if those seven students want to finish their degrees, they have to enroll in the USF College of Nursing in Tampa.

It’s not a change, just a logical first step, said Victoria L. Rich, dean of the USF College of Nursing.

The hope to build a four-year program that would appeal to high school graduates seeking a traditional university degree is on hold for the foreseeable future thanks to the university’s efforts to consolidate its three campuses into one USF by 2020.

In the meantime, USFSM will continue to build relationships with local hospitals and other institutions as well as establish its first on-campus basic skills laboratory.

“You have to build the infrastructure, and you have to show some immediate results to the community,” Rich said. “There’s no hidden agenda here, just the hidden reality that we want to do it right the first time.”

USFSM is also moving ahead with a new accelerated second degree program that will launch in January and would appeal to older, more mature students who traditionally show a higher success rate than their younger counterparts, according to Brett Kemker, the campus’ vice chancellor of academic and student success.

These students already have a bachelor’s degree and can complete the program in four-semesters, or 16 months. Applications close Oct. 4 and the program is expected to turn out 30 nurses by 2021.

“The real goal is to get more nurses in this area,” said Paul Kirchman, dean of the USF College of Science and Mathematics. “In this way, we will be getting more quality nurses more quickly and in a higher quality way than any other.”

While the Institute of Medicine has concluded that at least 80% of nurses should have a baccalaureate degree by 2020, only 33.5% of nurses in this region meet that standard today. Research has shown that a more educated nursing workforce correlates to decreased mortality and complication rates and fewer hospital-acquired infections and re-admissions.

Formed in 2013, the Suncoast Nursing Action Coalition has led local efforts on these issues in Sarasota, Manatee, Charlotte, and DeSoto counties.

Locally, meeting the challenge has been compounded by a lack of options for people who want to complete a traditional four-year degree without driving to Tampa, Orlando, or Fort Myers.

Working with SNAC, six regional institutions have expanded their programs and broadened access for people seeking a BSN or higher.

For example, Keiser University’s Sarasota campus added a four-year traditional nursing school two years ago, becoming the only school in Sarasota or Manatee to offer such a program.

In addition, State College of Florida’s “BSN in Four” offering allows students — often mothers of small children — to get their RN license and work while they complete their education.

“We have right now six programs that have stepped up to the plate in one arena,” said Jan Mauck, former chief nursing officer for Sarasota Memorial Health Care System and co-founder of SNAC. “That is something to be proud of.”