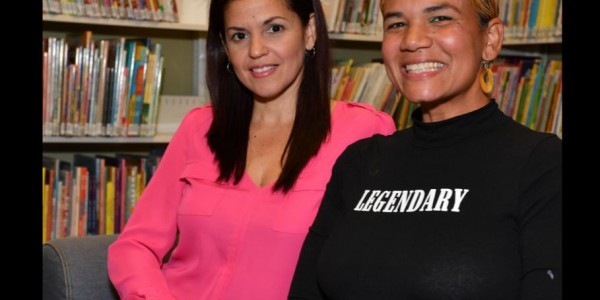 Two Friends, One bond, in the Season of Sharing

Posted on November 28, 2019 by Chris Anderson, columnist for the Herald-Tribune

Massiel Duran and Luz Gonzalez turned their unfortunate circumstances into a beneficial friendship. The Season of Sharing helped bring them there.

Hurricane Maria sounded like a monster, she remembers. It flooded her out of her apartment and left her sitting at night by a bonfire and eating food out of cans with her neighbors.

Luz Priscilla Gonzalez was living in Puerto Rico when Maria came ashore. She stayed two months after the storm, then sold the little bit of furniture she had salvaged for a couple of hundred dollars and bought a one-way ticket to Sarasota.

She worked in day care for a while, was briefly a custodian at Booker High, the night shift, riding her bike to get there, too. It was too dangerous coming home at night, so she quit. She was living with her brother, but when he brought in his girlfriend and her children to live with him, she was crowded out. There was no more room. She lived with a friend in Miami for a year, but the oldest of her two daughters missed Sarasota so they moved back.

She eventually landed at Harvest House last month, the transitional facility in Sarasota that helps the homeless, and two events took place that have had a profound impact on her life.

She received money from the Season of Sharing program to get her own apartment, including a bedroom for her two daughters, ages 5 and 18, and space for Dylan the dog to play.

Duran hasn’t had it easy, either. She is 42, from New York, a mother of six kids whose husband died of colon cancer on June 25. For the birthday of one of her young daughters, she bought a cake with food stamps and gave her a card in a pink envelope with a picture inside. The picture was of her deceased father holding her. The young girl pulls it out of a drawer in Harvest House each day, and Duran kneels down, looks her in the eye and tells her things will be OK. She believes it, too.

After her husband died at age 41, and prior to moving into Harvest House, Duran and her children stayed for a while in a donated RV at Myakka State Park. It was fun. Like a vacation. For a few weeks. Then it was no longer practical, so she approached Harvest House and was taken in last month. She is still there and hopes to be out soon. The limit is 90 days.

Duran and Gonzalez weren’t at Harvest House at the same time for very long this fall, but it was long enough to start a meaningful friendship. Duran came on Oct. 11. Gonzalez was out on Oct. 21.

The 45-year-old Gonzalez, per Harvest House rules, had to leave her temporary apartment each morning at 8 a.m. That’s to ensure people are trying to better themselves, and not just watching TV all day. Sometimes Gonzalez would be outside and Duran, who was not subject to the 8 a.m. rule, would invite her in for coffee. That was how their friendship started.

“I needed support,” Duran said. “And she needed it as well. We could relate to each other. We both had something and we lost it. We both had plans and they disappeared one day.”

Gonzalez does not speak English. Duran, who speaks English and Spanish, translates for her. They go to the library in Newtown together to work on their resumes. When Duran applied for a job at the airport last week Gonzalez stayed in the car with Duran’s kids.

Gonzalez cooks for Duran and said she feels Duran is special “because she is helping me, and not herself.”

“I feel if I’m helping someone else, it might open a door for me,” Duran said. “And that’s what we’re supposed to be doing, isn’t it?”

Duran thought enough of Gonzalez to sell her a couch. Not just any couch, either. The one her husband used to sleep on when he was sick and hurting. The couch has meaning. She wouldn’t have sold it to just anyone.

The couch is now in Gonzalez’s new two-bed, two-bath apartment in Sarasota. Season of Sharing provided Gonzalez with $839 for the first month’s rent. Duran has also used Season of Sharing funds in the past. Once to fix the alternator in her car.

With the help of her caseworker, Milli Gonzalez Stepanek, who works for the Safe Children Coalition, was able to secure vouchers for things like a coffee table from Angels Attic. The family Christmas tree went up Nov. 11. Who knows when it will come down?

“To have a room for my daughters is the most important thing,” Gonzalez said.

Their room has a dream catcher on the closet door.

Speaking of dreams, Gonzalez and Duran have one. They would like to start a foundation for woman and their children, one that addresses some of the needs that are sometimes overlooked.

“There’s more that can be done,” Duran said.

How to help
The Season of Sharing fund was created in 2000 as a partnership between the Herald-Tribune and the Community Foundation of Sarasota County. The goal is to get emergency funds to individuals and families on the brink of homelessness in Sarasota, Manatee, Charlotte, and DeSoto counties. Every dollar donated goes to people in need. There are no administrative fees and no red tape. Funds may be used for rental assistance, utility bills, child care and other expenses needed to help families get back on their feet.

Donations to the Season of Sharing fund may be made online at cfsarasota.org, or by sending a check (payable to the Community Foundation of Sarasota County) to Attn. Season of Sharing, 2635 Fruitville Road, Sarasota, FL 34237. Contact the foundation at 941-556-2399 for more information or to request a credit card form. All donations are tax-deductible. To read stories about families helped by Season of Sharing, go to heraldtribune.com/seasonofsharing.