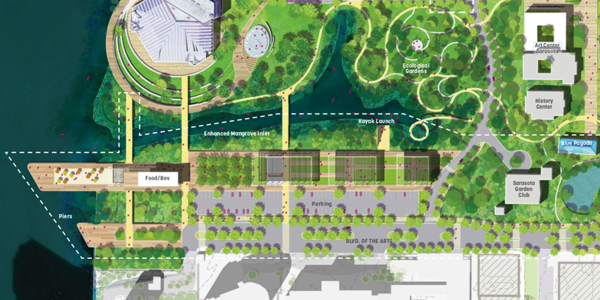 The Process for Turning Possibilities into Realities for the Community

Editor’s Note: Cathy Layton, A.G. Lafley, and Bill Waddill represent The Bay Park Conservancy (BPC), the private entity working with the City of Sarasota to create, co-fund, build, and operate a recreational and cultural destination on 53 acres of open space along Sarasota’s bayfront for the community.

Six months ago, the City Commission approved a master plan to transform the most precious bayfront property in the city from a parking lot into a signature public park. The Commission also approved moving ahead with implementation of the first 9 to 10 acres of green space and park land.

Recall, both the Coalition of City Neighborhood Associations (CCNA) and the Bayfront 20:20 Stakeholder Coalition endorsed the park design and plans and, importantly, the Commission approved governance and financial plans to develop the park in phases… and to operate and sustain the park as each phase is completed.

Much has been accomplished by a three-way partnership and ongoing dialogue among:


...which have informed the design and plan every step of the way and will be fully realized and brought to life in the first phase of the park.

And, now the Bay Park Conservancy (BPC), a not-for-profit organization has the responsibility to:


From the beginning, this initiative has been community-led and has focused on the plan, the process, and the people required to turn possibilities imagined together into realities we can experience and enjoy together as a community.

Both the master plan and the first phase design not only reflect adopted Guiding Principles, but also create the only major amenity in the city of Sarasota that will be open, accessible, free, and welcoming to everyone in our community. The park will be common ground, a gathering place where the full diversity and richness of Sarasota’s community can come together for a wide variety of activities and experiences now, and for generations to come. This park will answer the hopes and aspirations of the tens of thousands of voices who have been engaged in this design dialogue.

The process has been disciplined and sequenced one logical step at a time. The process has and will continue to include ongoing engagement and dialogue with the community, stakeholders, the city, the county, and the incredibly generous foundation and philanthropic community which has funded every dollar of the effort to date and will continue to contribute as we move to park development and implementation.

The design, governance, and financial plans are the result of an unprecedented collaboration and dialogue involving more than 50,000 individual interactions, and the work of more than 100 professionals and volunteers.

An important part of the process has been to learn from other cities, communities and not-for-profit organizations that have created similar signature public parks, and to assemble the resources, experience, and talent we need to develop, fund, operate and sustain a signature park on Sarasota Bay.

Sasaki was hired because they have a proven track record of not only designing and master planning great community parks (many on the waterfront), but also developing and delivering the parks they plan.

Together, Sasaki, Bill Waddill, and AG Lafley have personally and actively led the design and development of more than 25 public civic spaces and community parks across America. They have worked with a wide range of cities, (small, medium, and large) and with a range of not-for-profit organizations, including park conservancies. In many cases, the new park creation was enabled by a partnership agreement between the city and a not-for-profit development, funding, and management partner.

Bill's experience includes the Siesta Key Beach Park, the Bradenton Riverwalk, Celery Fields and Blackburn Point parks, and both the Riverwalk at Kennedy Blvd Plaza and the Perry Harvey Park in Tampa, Florida.

AG was a recognized leader in the creation of important civic spaces in downtown Cincinnati, Ohio, including Fountain Square, Washington Park, and Over the Rhine.

In addition to this extensive experience, we also connected with and learned from another 15 creators of significant parks across America and studied how they were organized and reviewed in detail their actual, existing partnership agreements.

We seek first to understand and learn from those who have done and are doing what we are working together to do — to realize the aspirations of the community and the expectations of the city by transforming 53 acres of precious city land that has been neglected and underdeveloped into a signature park for everyone in Sarasota.