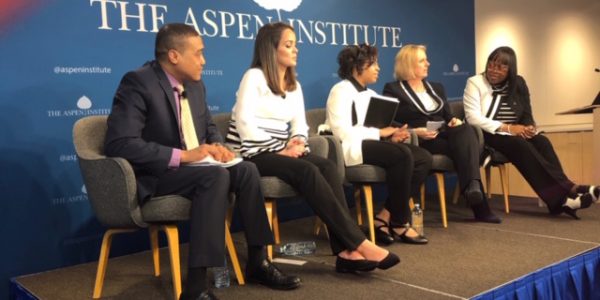 The 2019 Aspen Forum on Children and Families: Lessons from Parents

Posted on March 01, 2019 by Beth Duda, playwright and director of the Suncoast Campaign for Grade-Level Reading

The 2019 Aspen Forum on Children and Families convened by Ascend at the Aspen Institute brought more than 350 practice and community leaders, policymakers, researchers, and philanthropists to Washington, D.C. for two days of learning and sharing about investing in the full potential of children and families.

Ascend at the Aspen Institute is a hub for breakthrough ideas and collaborations that move children and their parents toward educational success and economic security using a two-generation approach.

There were many takeaways from this two-day event featuring a stellar line-up of presenters and panelists with thoughtful questions posed by impressive, highly-credentialed audience members, each with the shared goal of charting a new and stronger course for our nation’s children.

The words that are ringing in my ears making a lasting impact on my heart didn’t come from the CEOs of foundations, executive directors of national nonprofits, or the PhDs and MDs who educated and informed us with their research, success stories, and big ideas for further innovation. Rather, they came from parents — brave parents who were willing to share their experiences with us. These were stories of hope, resilience, and frustration. By sharing their realities with us, they were able to make us see and feel how our big systems often fail our families.

Take, for instance, Daniel. A single father dedicated to raising his son in the kind of stable home he never experienced. Born in Puerto Rico and transported to New York City when he was a small child, Daniel was raised in chaos by a single mother in a less than desirable neighborhood. He found himself alone at age 14 when his mother died. He fell into despair, made bad choices, and self-medicated with drugs. A self-professed “junkie,” Daniel turned his life around when he found out he was going to be a father. The biological mother wanted to give up the baby, so Daniel became a single Dad. He kicked his drug habit and was ready to work, but a lack of affordable childcare and his record of drug use made it impossible to get a job. To further complicate things, Daniel’s son was diagnosed on the Autism Spectrum. Daniel struggled against the odds to get his son the services he needed. Childcare facilities were not equipped for special needs children, the clinics did not have specialists available to help his son, and Medicaid insurance changes often required him to travel great distances to meet brand new doctors unfamiliar with his son’s situation. For more than five years, Daniel found himself unable to work, unable to get the help he needed for his son, and shuffled from agency to agency. Each new agency would ask Daniel for his history, which would prompt an investigation into his former drug use resulting in unannounced home visits, cabinets being searched, and question after question about the life he had led...with almost no questions about the life he was currently leading.

After years of struggle, Daniel found his way to STRIVE in New York City. STRIVE is a nonprofit agency headquartered in East Harlem that provides skills training, certification, and job placement services to help New Yorkers get back to work. Daniel is employed, engaged, and committed to helping other single dads. A lesson from Daniel: Struggling parents don’t need hoops to jump through; we need real paths to opportunity.

We heard from Rynn, a single mother of three who spent years on public assistance, never allowing herself to dream of a better future for herself. The fear of the unknown, her fear of not “having what it takes,” and no clear idea of what was available to her kept her stuck. She shared her feelings of never really feeling like she mattered to the people working for the systems she encountered. She finally met a Head Start teacher who believed in her and her potential. With the help of Head Start and the Jeffco Prosperity Project, Rynn now has an associate’s degree and will be pursuing a bachelor’s degree in Social Work. A lesson from Rynn: A person doesn’t care what you know until they know that you care.

Several other parents shared their stories. We heard about valuable services offered only during hours that were inconvenient for parents or located away from public transportation routes. We were told about agencies with applications for services that are several pages long, and systems and procedure put in place more to catch potential cheaters than to serve the people in need of the services. The lesson from these parents? Relationships matter.

Trust was built when the people striving to make a difference authentically showed up, were willing to be humble and vulnerable, and listened deeply with a willingness to change the status quo. Grace was exchanged between the people wanting to help and the people who were willing to risk dreaming of a more stable future for themselves and their children. In some cases, rules needed to be bent or additional resources were required. Sometimes being helpful requires a lack of judgment or a willingness to acknowledge you’ve arrived with many questions and no clear answers. Sharing that mutual vulnerability leads to relationships. Relationships lead to trust, and real sustainable change happens at the speed of trust.