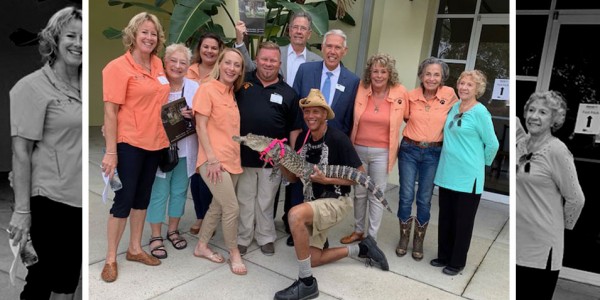 No Margin, No Mission

We were introduced to Larry Clark and Michael Oxman of No Margin, No Mission. They partner with The Patterson Foundation on an initiative called Margin Mission Ignition (MMI) to provide expertise to local nonprofits to help grow their bottom lines. Big Cat Habitat is honored to be one of five local nonprofits selected by The Patterson Foundation, with MMI’s input, to continue on this 30-month journey.

At 10:00 AM, donors and guests were greeted by baby goats from our petting zoo and one of our adolescent alligators.

Once everyone was in the meeting room, following the schedule was of utmost importance. Big Cat Habitat had 15 minutes to make our “Fast Pitch.” The final 30 minutes were reserved for distribution of the business plan, Q&A, and closing remarks from Larry, Michael, and our host Michael Corley of The Patterson Foundation.

Larry Clark gave the opening remarks; thanking the donors/investors for their attendance, highlighting the importance of the “Fast Pitch,” and introducing the members of our team.

Kay Rosaire was the first to take the podium. As Founder and President of Big Cat Habitat, she guided our audience from the early days, when only one building and two exotic cats made up the facility, to the present. Currently, the Habitat has over 50 exotic cats with an additional 100+ animals calling Big Cat Habitat home.

Next to speak was Kay’s son, Clayton, Big Cat Habitat’s vice president. He gave an update and spoke about the Habitat’s future growth plans.

Nancy Nallin, team leader, was the third speaker. She dissected our new earned-income plan, summarizing the 54-page business plan and breaking down the financials for the next three years.

Explaining the success of the Event Venues program is dependent on the first year. Nancy made a personal plea to those donors in attendance. To meet the $176,659 operating expenses for the first year, their generosity was necessary.

Having completed the allotted 15 minutes for the presentation, our moderator, Larry Clark, entertained questions regarding our presentation. The air was filled with hands wanting to know about the animals.

Several times during the Q&A, Larry had to re-direct the questions to the Habitat’s new earned-income program. Ironically, the interest in our exotic animals at Big Cat Habitat segued back to the importance of the donors partnering with the Habitat and making our Event Venues undertaking a success.

The final speaker was Michael Corley. He thanked all for coming and re-emphasized the value of the donors/investors in attendance to the success of our endeavor. To our amazement, Michael announced, The Patterson Foundation would make a dollar for dollar match on all donations up to $50,000 toward our initial operating expense of $176,659. This news brought “tears of joy” to several of our members.

All the months of hard work and soul searching have been rewarded. Following those remarks, several donors stepped forward and made pledges; two checks were donated totaling $7,000. We have received several additional checks totaling $35,000 since our “Fast Pitch.” How exciting, we are only $8,000 from receiving The Patterson Foundation’s total match of $50,000. More importantly, $100,000 towards the first year’s operating expense!

Thank you, Larry and Michael, and thanks to The Patterson Foundation…