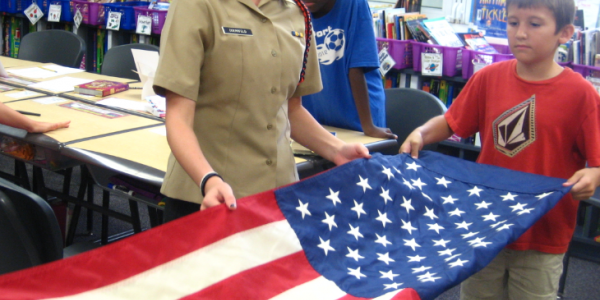 Posted on May 19, 2014 by The Patterson Foundation

The American Flag is an enduring symbol of the ideals on which our nation was founded, one that deserves respectful observance on a daily basis. Yet few Americans have ever had the opportunity to properly handle a flag, let alone learn its history and traditions.

It may be surprising then to witness children expertly folding Old Glory into a perfect blue triangle, but a group of more than 300 fourth and fifth-grade students from Lamarque Elementary School and Pine View School can claim this impressive feat thanks to a flag-education course that was created by the Military Officers Association of Sarasota and Sarasota County Schools in partnership with The Patterson Foundation's Legacy of Valor campaign honoring veterans.

A team of educators from Sarasota County Schools – including Army veteran and Lamarque teacher Dawn Vittorio and Lamarque teacher and military parent Tammara Purdin –created the voluntary 10-part lesson plan, working closely with members of the Military Officers Association of Sarasota. The curriculum was designed to preserve the history, traditions and proper observance of this national icon.

The course culminated last week in the final lesson where students reviewed what they learned. Following the review session, JROTC cadets gave students a hands-on demonstration of the proper flag-folding technique. Local veterans were on hand to offer their own guidance in an event engaging patriots of all ages.

Cadets emphasized precision and care as they walked their groups through each step of the ritual, after which students had time to practice with their fellow classmates.

“Many of the students are visual learners, so it was important to give them the chance to touch and work with the flag,” said Linda Gould, coordinator of the Legacy of Valor campaign and a retired Army Colonel. “It’s the first time most of them have done so.”

Upon successfully displaying their skills, each student received a certificate denoting their accomplishment. While the award is certainly worthy of praise, the students had newfound awareness and respect of America’s guiding principles.

The curriculum will be available at more Sarasota County schools in time for the upcoming school year, granting more children the opportunity to learn lessons of patriotism and reverence.