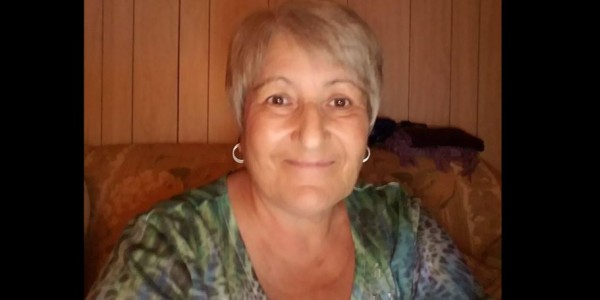 Season of Sharing: Don’t Be Afraid to Ask for Help

Editor's Note: This article was originally published in the Herald-Tribune and is written by Michael Moore Jr.

Angela Grabowski, 66, found herself in a difficult situation, both financially and physically, after she fell in her driveway in June. But with the help of Season of Sharing, she was able to get back on her feet and pay her November rent.

When 66-year-old Angela Grabowski found herself face down on all fours in the middle of her driveway, she was confused. She wasn’t sure how she got there, but it didn’t seem good.

All Grabowski knew is that when she tried to sit up, she couldn’t move. That’s when it started to dawn on her that she might be in a bit of trouble. Then she felt the pain radiating through her back.

It was 6:30 a.m., and there weren’t too many people out. She spent the early hours of June 21, 2019, sprawled across the asphalt, crying out for help but to no avail. It took half an hour for a man walking his dog to find her and help her up — but the fall had already changed Grabowski’s life. She just didn’t know it yet.

Grabowski worked in private home care at the time and was a caregiver for a couple in their 90s. That all changed in an instant. Now she was the one being cared for.

The two little steps going out her door never seemed that dangerous before, but they had done damage. She must have slipped while going down them, she reckons. Those two little steps prompted a three-day hospital stay. They made it so that she couldn’t walk for a week. Then five weeks of rehab.

Six months after that fateful Friday, Grabowski’s life still isn’t the same. Things are better, but not the same.

But it could have been a lot worse. She could have lost her home if she hadn’t been courageous enough to “swallow her pride and ask for help” when she needed it most.

Help from Season of Sharing
Grabowski is one of many who are helped each year by Season of Sharing, a collaboration between the Herald-Tribune, other media partners, and the Community Foundation of Sarasota County aimed at getting emergency funds to those on the brink of homelessness.

Since it started, more than $21 million has been raised for the cause, and last year alone, more than 3,000 recipients were helped.

The help, distributed through more than 70 social agencies in the area, comes in the form of one-time financial assistance up to $1,000 for those who need help taking care of necessities such as utility bills, car repairs or paying rent. No red tape, no administrative fees, and no overhead — just help from the community to those who could use a hand.

“I live alone, so it was hard. It’s just a hard situation for anyone to be in. Especially for me, because I’ve worked since I was 14 years old and in high school. So I’m not really used to asking people for help,” Grabowski said.

But after not being able to work for months and receiving only modest Social Security payments as her medical bills piled up, Grabowski found herself in a situation where she could use a hand. With November rent looming, she had to come up with a solution. That’s when she heard about the Senior Friendship Centers’ “Friendship at Home” program.

She got a late notice from her landlord. Next would have been an eviction notice.

Reaching out for a helping hand
Grabowski decided to contact Senior Friendship Centers.

The centers are one of the many social agencies in the community that distributes Season of Sharing money to those in need. Most recipients are everyday people impacted by tough circumstances, said Ola Medrzycki, who has worked as the Friendship at Home coordinator for more than ten years.

“Working in this field, you realize how easy it is to find yourself in a situation that is out of your control,” Medrzycki said. “You see how easy it would be to become homeless. Many people are living paycheck to paycheck and sometimes have to choose what’s most important between things like medication, food, utilities or rent — and that’s a hard decision to have to make. Because all of that is important.”

The Friendship at Home program serves a variety of functions. Volunteers visit the homes of older adults to give them companionship. They call them to socialize. When the need is there, they use Season of Sharing funds to help financially.

“It’s a huge help. People get this help, and sometimes it changes their life for the better and helps them improve their situation,” Medrzycki said.

It took Grabowski months before she could get to a point where she wasn’t worried about falling all the time. Her knees would shake, and she would hold onto things while she walked. Even before her fall, she had been struggling to keep her head above water and keep up with her bills, with an income that left her no real financial cushion.

After the fall, things were so much harder. She was angry. She kept asking herself why it happened to her. It left her feeling helpless, hopeless, and dependent at times. As someone who worked professionally as a caregiver for years in addition to being a caregiver for her mother and father before they passed, being on the receiving end of that same care was an unfamiliar situation.

Not being able to pay her bills was even more unfamiliar. Season of Sharing and the Senior Friendship Centers made a big difference, Grabowski said.

Good advice
She got to keep her home. Things are not quite back to normal, but they’re getting there. She still suffers from nerve damage and pain in her upper back around her shoulders but is getting to the point where she said she’s ready to go back to work.

Grabowski is in the process of job hunting and had an appointment with the Friendship Centers last week to discuss job prospects. The organization also helped her with things like shampoo, soap, and toiletries — things that she said are a huge help since they are not covered by food assistance.

Medrzycki puts it this way: “It can happen to anyone. I could be next. We just never know, life is so fragile. Sometimes you are working and saving to pay the bills, and one day a disaster happens, and everything changes.”

It took a lot for Grabowski to ask for help, but she’s happy she did. For others who find themselves in a similar situation, she would encourage them to do the same.

“This is very hard for me to talk about. I don’t discuss a lot of this stuff with my family because it’s embarrassing. But it shouldn’t be embarrassing because I’ve worked my whole life and sometimes you just need help. It doesn’t make you a bad person. But being the type of workaholic I am, it’s very frustrating for me,” Grabowski said.

“The first thing I would tell you if you are struggling is, ‘Don’t beat yourself up over your situation.’ Everybody gets to a point at some time in their life where they may need to reach out to someone and ask for help,” she said.

“For a long time, all I saw was an oncoming train, and the Friendship Center was the light at the end of the tunnel for me.”