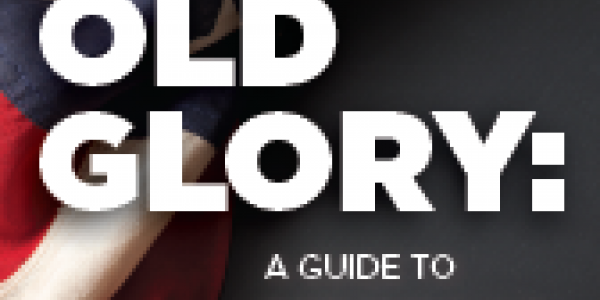 Posted on March 19, 2014 by The Patterson Foundation

Respect for our country and the sacrifice of veterans and active-duty military hit close to home for Tammi Purden, a fourth-grade teacher at Lamarque Elementary in North Port. With a son serving with the Air Force in Afghanistan, a daughter stationed in Kansas with the Army and another daughter who recently retired from the Army after being injured in Afghanistan, Purden knows the range of emotions military parents face every day.

Purden and her colleague Dawn Vittorio – who is an Army veteran – were part of a team of educators from Sarasota County Schools who worked in partnership with the Military Officers Association of Sarasota to develop a curriculum to teach students about the history of the American flag and ways to respect and honor it as a symbol of our country.

“If we want the traditions of the flag and the National Anthem to be carried forward for the generations to follow, we must teach it today,” said Vittorio who served for two years in the Army as a public affairs specialist.

That was the inspiration behind the flag initiative, which includes a 10-part lesson plan supported through The Patterson Foundation’s ongoing Legacy of Valor campaign to honor veterans and their families in Southwest Florida. The voluntary curriculum will reach fourth and fifth grade classrooms in Sarasota County.

Lessons include topics from the history of the Star Spangled Banner to the meaning of the Pledge of Allegiance. Led by the Military Officers Association of Sarasota, the initiative includes partners such as Girl Scouts of Gulfcoast Florida and several military organizations. JROTC high school students or a local Girl Scouts troop will teach the final lesson in the plan, with the assistance of a local veteran, to demonstrate the proper flag-folding technique. The flag-folding component is also now featured on EdExploreSRQ.com, an online website connecting educators to our community's cultural experiences.

“Through their service to our country, each of our members has developed an acute appreciation for the flag – both as an emblem of America’s courage, compassion and strength but also as a symbol of the oldest continuing democracy in the world,” said Tom Piazze, second vice president for the Military Officers Association of Sarasota. “It has been our pleasure to participate in this in hopes that through this curriculum thousands of young people will better understand our nation’s history, culture and ideals.”