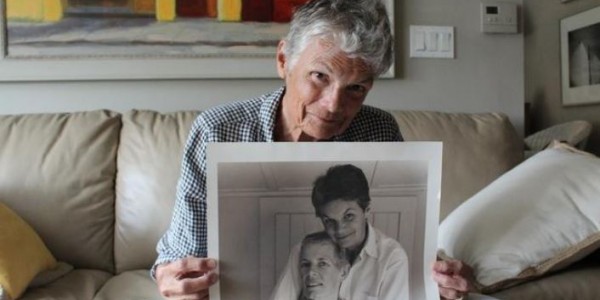 ‘I had spent my whole life up to that point letting other people tell my story. It was time I told mine.’

It started with a place called the Stonewall Inn.

Gay bars had been raided by police for decades. Lesbian, gay, bisexual, and transgender people had become targets for harassment and beatings from the people who were supposed to protect them.

On June 28, 1969, after the police stormed inside the club in Greenwich Village, the clientele fought back. That led to a scuffle, which led to protests that lasted for days. Those events sparked the beginning of the movement for LGBTQ rights.

Many of those who were in Greenwich Village 50 years ago, those who protested, and those who were not there but were inspired to come out are being celebrated across the country this month.

At 25, Joan Alden of Sarasota was in east Manhattan that June, studying at the Stella Adler Conservatory of Acting when reports of riots hit the newspaper stands, chirped over the radio and TV sets.

Alden was not at the Stonewall Inn and did not participate in the protests. But, like thousands of others across the country, those moments inspired her to be open about her sexuality.

Six months earlier, she had met Allyson, an office worker who introduced her to James Baldwin’s books and novels. Allyson looked like she’d truly lived, as if life had chewed her up and she was better for it.

Allyson introduced Alden to love, the kind that makes your cheeks blush and insides do somersaults — the kind that made it impossible to hide who she always felt she was. The kind that inspired a brave letter to mom and dad.

“Trouble,” they said, behind her back.

Her mother, Margaret, turned colder and more critical for a few decades.

In those days, homosexuality was considered a mental illness. There was something wrong with you; you were seen as disgusting and a sinner, Alden said.

“We weren’t seen as people — we were seen only as the sex we had,” she said. “We were thought of only in terms of a sex act, and not an orientation or even as a preference.”

In the months leading up to Stonewall, it was easy to conceal herself and her feelings for Allyson. They dared not hold hands or kiss in public. Pronouns were switched when they described weekend plans to coworkers and acquaintances.

In the days that followed the riot, gay pride slogans were spread in graffiti all over Greenwich Village. Men, women, and transgender people were seen kissing, holding hands and embracing in public.

Alden found she no longer cared who knew and she was determined to fight for her right to be seen as a human being.

“I felt like I’d never be free unless I showed the world who I really was,” said Alden, who took every opportunity after the events in 1969 to break through barriers. The goal was to show everyone that her sexuality didn’t make her a bad person.

“Inside, I always knew I was a lesbian and that I had spent my whole life up to that point letting other people tell my story. It was time I told mine,” she said.

The following year, on Sunday, June 28, 1970, with Allyson and throngs of others by her side, Alden marched in New York City’s first Pride March as it snaked from Sheridan Square through Greenwich Village and up Sixth Avenue, ending in Central Park’s Sheep Meadow.

“I felt for the first time in my damn life that I was celebrating who I was,” said Alden, now 75. “And the people on the sidewalk, packed four deep, were watching us, giving the thumbs up, were celebrating us for who we were, too.”

‘There will be light’
Alden could tell you about being born and raised in Michigan and then Ohio, how she was the middle child in an upper-middle class family with no boundaries. She could also tell you about being the “it girl” in high school, the cheerleader, the one everyone wanted to get to know.

She could tell you about being an athlete who bested all of the boys at basketball, baseball and football and dreamed of one day becoming Babe Didrikson, an athlete who went on to win two gold and one silver medal in the 1932 Olympics.

Alden could even tell you about being engaged three times to three separate men, but never walking down the aisle because, for reasons she couldn’t identify at the time, she just couldn’t.

She’d much rather tell you about life after Stonewall, about that day in 1979 when she met Catherine Hopkins. She was drawn to her completely.

This is how they fell in love.

When the woman who looked like Amelia Earhart blushed as she introduced herself, Alden’s heart skipped. There was something in Hopkins’ kind face that told Alden to follow her into the future.

Through their relationship, Alden taught Hopkins how to put feelings into words. Alden made it possible for Hopkins to come out as a lesbian.

Hopkins, a photographer, modeled unconditional love for everybody. Hopkins showed her how to approach the world with open arms. To sit and wait through darkness for the light to come.

“I knew that I would go crazy without her,” said Alden, whose lips still tremble when she thinks of that night, alone in bed, two decades ago. “I wanted to kill myself because I didn’t want to die alone, decades after, without anyone.”

Caring for Hopkins was a privilege, said Alden. No small task went unthanked. She never complained about the symptoms. She covered her pain and difficulties.

To cope with the loss, Alden wrote letters to her wife every day in the first year after she died. It was how she survived. Sometimes she could hear echoes of Hopkins’ presence as she wrote.

Fifteen years later, Alden assembled some of the most important letters she wrote to Hopkins into a book.

“Her Widow” was published last year.

That was the last book Alden wanted to tell before her multiple sclerosis took most of her ability to move and remember.

“My whole reason for writing all these years was to get to that book,” she said. “It was as if I completed my assignment.”

These days she scrapes by through Social Security. She sells her paintings to CitySide Apartments to pay rent.

Alden has two years until she runs out of money and will be forced to move.

She doesn’t want to live in an assisted living facility.

The affordable housing options for seniors she found, with their chipped paint and stale smell, made the 75-year-old feel trapped and “fading away already.”

But this week, as the newspapers, television stations and radios remember the Stonewall Inn and the fight for the rights of gay, lesbian, bisexual and transgender people, Alden wonders about the lessons her late wife taught her.