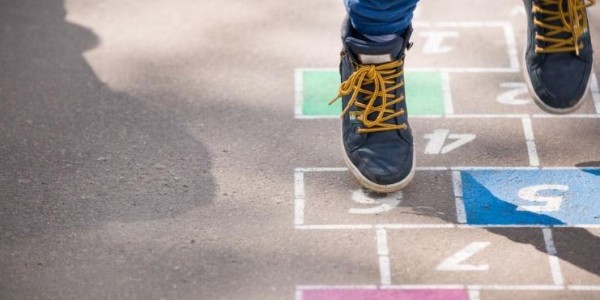 If aliens examined humans, they might puzzle over hopscotch and peek-a-boo, and categorize play as pointless.

But according to the latest research, play is paramount for early childhood development.

“When children are playing, they’re learning executive function and building foundational skills for resilience allowing them to respond to adversity in a healthy way,” says Dr. Andrew Garner, pediatrician and co-author of the “The Power of Play: A Pediatric Role in Enhancing Development in Young Children,” featured in the journal Pediatrics in August. “There’s nothing wrong with strong emotions, it’s what you do with them. We want to use play to build healthy adaptations to stress.”

The report is a compelling collection of studies supporting the evidence behind the many rewards of play.

Besides the more obvious physical benefits of physical play for mitigating child obesity, Garner said it’s a buffer for toxic stress, which has been proven to interrupt brain development. And while it can heal the effects of adversity, play is also a platform for social-emotional learning and is credited with elevated test scores in children, including reading and math.

“For the brain to be receptive, you need to get rid of toxic stress. When a child is in survival mode, they’re not worried about sight words,” he said.

That’s why he prescribes play at his practice.

The report urges other pediatricians to do the same in the face of play getting pushed aside for other priorities.

An increased focus on academics and test scores have led to more rigorous lessons designed to increase reading and math skills as early as preschool, with a corresponding cut in play.

Because of increased academic pressure, 30 percent of U.S. kindergarten children no longer have recess, according to the report.

Through play and the social-emotional learning it supports, “the test scores go up even when less time is spent on the material.”

There is no national policy on recess, and most elementary schools only provide students 30 minutes of play in a seven-hour school day, much of the time adult-led with the child seated.

While Garner stresses this is not enough time, barriers to play go beyond the school bell.

A national survey of 8,950 preschool children and parents revealed that only 51 percent of children went outside to walk or play once a day. Parents had safety concerns about outdoor play, and with just 20 percent of homes located within a half-mile of a park, access was found to be limited.

It’s so crucial to children’s well-being that “one of the first things that happens in a disaster is to organize opportunities for play,” Garner said.

With digital play a billion-dollar industry ranging from LeapFrog to Fortnite, digital play doesn’t offer the same benefits, and while some online tools support learning,” real-time social interactions remain superior to digital media,” according to the report.

Garner said it has to be fun, voluntary, intrinsically motivated, age-appropriate and is best when social.

Board games, pretend play, and rough and tumble get a thumbs-up.

“The best type of play is child-led,” he said.