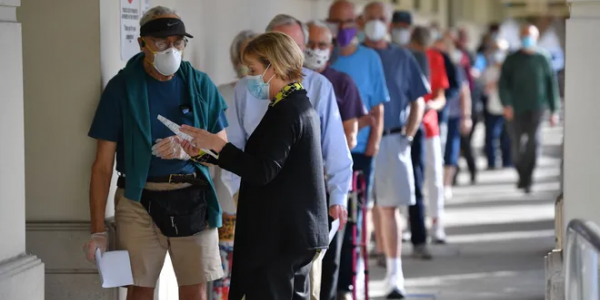 Posted on January 04, 2021 by Louis Llovio, Sarasota Herald-Tribune
Thousands of older people may not get the potentially life-saving COVID-19 vaccine as early as hoped because local health departments are forcing those who want an appointment to apply for it online.

This decision leaves older people who lack access to or are not comfortable with technology unable to secure one of the already hard-to-get and coveted spots to get inoculated.

Both Sarasota and Manatee County health departments have created appointment systems where people have to go online to register for a place in line and then download and print the forms they'll need.

That's a nearly impossible task for thousands of older people who either don't have computers, smartphones, and printers or, when they do, are not proficient enough to quickly snap up one of the few available spots.

Nicholas Azzara, a Manatee county spokesman, said Thursday that the county was allotted only 3,500 doses of the vaccine. So officials decided to "distribute the initial batch as efficiently as possible," believing that "a quick, efficient showing early on" would mean the county would get more vaccines, he said.

A spokesman for Sarasota County's Department of Health did not respond to an email request to comment on this story. His voicemail was full.

He called the pandemic "a catastrophe" and said his group is working with state officials to make sure older adults know when, how, and where to get access to the vaccine.

"AARP Florida believes state and local governments must be transparent about their vaccine distribution plans and keep the American public informed," he said in an emailed statement.

The local vaccine rollout sheds light on an issue that's been made worse by the pandemic as more and more of daily life has shifted online.

While this shift is seen as positive, giving people the ability to work and communicate remotely and mitigating problems like isolation, older people who have been hit hardest by the pandemic have, in large parts, been left behind, experts say.

A November study in the journal Frontiers in Psychology said, "this results in a paradoxical situation, in which the population most affected by the lockdown is also the population least helped by the digital tools aiming to mitigate the negative effects."

Forcing older people, who are the most vulnerable in the pandemic, to go online to access a potentially life-saving vaccine is an example of this. The people who need the vaccine the most are likely the least able to get access to it.

She said that along with the issues other older people deal with, non-English speakers face "all kinds of problems and fears" as they try to get answers and look for the vaccine.

"Technology divide, transportation challenges, literacy, and English-language issues, distrust of government, and mixed messaging," she said, "go along with a preoccupation with trying to cope with current psychosocial issues and complex chronic health conditions."

Azzara said plans are in the works to make sure people without access to the internet know what's going on with vaccines and how to get them when more doses are available.

"Once that plan is fully established," he said, "we'll work with our aging services division and local partners who serve older adults to disseminate the news and ensure those folks receive vaccinations if they would like to be vaccinated."

He expects the process to work similarly to the county's hurricane emergency system, where emergency management works closely with aging services to make sure people are notified of urgent information.

For those older people looking for an appointment but who do not have access to or cannot work on the internet, there are resources available to help them navigate the system.

Renee DiPilato, director of Sarasota County Libraries and Historical Resources, said older people who need help can go to any branch to use computers to set up appointments and print forms. (Editor's Note: Keep in mind with social distancing, available computers at the library may be limited.)

For people who are not comfortable with computers, "staff will be on-site to help those who need it," she said.

And in Manatee, Tracie A. Adams, human services program manager for the county's Neighborhood Services Department, said the elder helpline had seen an uptick in the number of calls it receives since the vaccine became available.

She said that her staff has attempted to register those who cannot do it independently and has a list of people to call when more doses become available Monday.

"I only say attempt to register because we will be going through the process the same as anyone else trying to register for an appointment, and we don't know how quickly they will fill up," she said.

Azzara, the county spokesman, said that Manatee's 311 call center can help Spanish and English speakers with the forms and with setting up appointments. The department of health is also available.
"The message we're stressing is one of patience," he said.

"We understand the urgency for many thousands of people wanting to be vaccinated. Many people who weren't able to book an appointment for this first round of vaccinations will be able to find an appointment and vaccine in coming weeks."