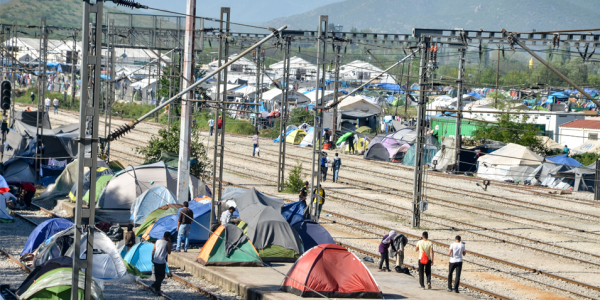 Maintaining Hope in the Face of Global Crisis

The global refugee crisis is an overwhelming, ongoing event the world urgently needs to face. It seems impossible, but as of now, there are more than 70 million displaced humans. As philanthropists, our hearts bleed because we each have an area of focus, and we know that in the case of refugees, they are affected deeply by nearly all of them.

On World Refugee Day 2019, I went to a screening of Ai Weiwei’s film Human Flow, which does a heartbreakingly beautiful job of outlining the vastness of the refugee crisis.

I was taking notes thinking, “Where does philanthropy belong in alleviating this human suffering?” My response to myself was: immediate need, near-term conflict resolution, long-term recovery, everywhere.

One of the challenges of working in philanthropy is that it is easy to become overwhelmed by the issues you are trying to address. I left the film telling my husband there are entire generations of children being lost to trauma, how can we even conceptualize what helping them would look like?  In the face of such an overwhelming prospect, it is necessary to take action in order to maintain hope. The total scope of “solving” the refugee crisis isn’t an issue that can be tackled by any individual organization, country or person. But every person, business, organization, and country can find a way to help that reflects their values and ability. Recognizing our place as community members of a global society contributes to preserving refugees’ dignity and humanity.

Through the lens of being global citizens, The Patterson Foundation has contributed to the Center for Disaster Philanthropy Global Refugee Crisis Fund to expand capacity-building efforts to protect people forcibly displaced within Syria. Additionally, The Patterson Foundation has provided catalytic funding to NetHope to bring Wi-Fi hotspots to refugee camps in Greece.

These efforts won’t end the crisis, but they do provide the security of being able to reach family and creates accessibility to apply for asylum, plan for the future, access education and trauma services, and alleviate some of the detriment isolation causes. Creating the opportunity for connection allows hope to grow in suffocating circumstances. As global citizens, we must learn and engage in ways that will create paths for all humans to not just survive but thrive.