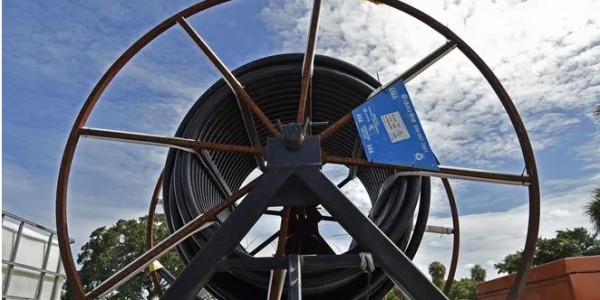 Now, Longboat Key is embarking on a massive, voter-approved project to position the town to embrace newer technologies.

Since last summer, the town has been fast at work burying its overhead utility lines in a process known as "undergrounding." Utility poles will be no more, and taller "smart poles" will take the place of existing street lights.

But also included in the project is a town-wide fiber optic network that ultimately seeks to provide 100% coverage of the community over time.

"We're excited about the opportunity to tie all of our facilities in with our own fiber network," said Town Manager Tom Harmer. "Our IT staff sees that's going to provide us quite a benefit — capacity-wise, reliability-wise and technology-wise."

The town estimates that 7% of its residents are "severely limited" in fiber-based broadband choices. It also says the town ranks as the 75th most-connected town in the state, ahead of Palmetto, Bradenton, Ellenton, and Bradenton Beach.

Harmer said the project was born out of an ongoing concern about weak or spotty cell service on the island.

Harmer anticipates that different services could emerge from the project, such as cameras or sensors atop the smart poles that could enhance public safety. He also said the poles will be designed to allow fiber to run up to an antenna on top for increased connectivity.

"How do we utilize new technology — not just cellular technology, like 4G and 5G — but other technology to provide an advantage to the residents that live here, the visitors that visit, and the town itself?"

And the benefits of underground infrastructure are myriad, he said.

"We think it provides significant reliability, especially during storm events," he said. "You don't have the typical tree limbs or trees that will pull down lines or shut off service, so you get a more reliable service for that.

"We believe it's safer, and obviously, there's an aesthetic piece to it as well."

The first, approved by 62.6% of voters in November 2015, cleared the way for a $25.25 million bond to fund the undergrounding of utilities along Gulf of Mexico Drive.

Another referendum in March 2016 approved a bond of up to $23.85 million to fund undergrounding along all remaining neighborhood streets — an undertaking dubbed "The Neighborhood Project." That referendum was approved by 52.9% of voters.

Both projects are co-occurring and are referred to jointly as the Town Undergrounding Project. But for the purpose of bond financing requirements, they are being accounted for separately.

The bonds are being repaid by non-ad valorem tax assessments based on the project's benefits to property owners, not the value of their property.

According to Harmer, a number of residents have already prepaid their assessments.

Others were given the opportunity to make payments over time. And in the event of a property sale, many owners have worked the assessment costs into their closing negotiations, so new buyers don't have to pick up the tab.

The project is divided into four phases that start at the south end of the town and move northward before meeting in the middle. It is slated to be completed by 2022.

As of late July, Harmer said, phases one and two along The Gulf of Mexico Drive portion of the project are already complete. Phase one for the neighborhoods portion is underway.

The town contracted Wilco Electrical, a West Palm Beach-based company, to complete much of the undergrounding construction work. The town recently signed its binding cost estimate with Florida Power and Light for phase three.

Longboat Key is primarily served by internet providers Comcast and Frontier. According to Harmer, the town solicited offers for public-private partnerships for the fiber network last year, but none of the negotiations reached an agreement.

"We are still looking for opportunities to work with a private partner or partners on the infrastructure," he said. "We think it's important to get the project going and get some of this infrastructure in place."

"These types of companies move pretty fast," he continued. "They don't want to wait two or three years for infrastructure to be in place."

Harmer said the town has talked to other communities to understand the full range of how they are improving internet access for residents.

Fort Collins, Colo., was one of them. The city launched its own broadband service, "Fort Collins Connexion," following a 2017 ballot measure. The service offers residents one-gigabit upload and download speeds for $59.95 a month, and 10-gigabit speeds for $299.95 a month.

"We are not heading that way," Harmer said. "But still, their staff did a lot of research."