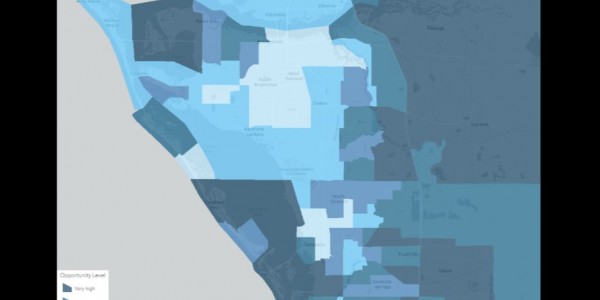 Inequities in Child Opportunity Revealed in Latest Research of US Neighborhoods

Adjacent neighborhoods can have wide disparities in lifelong outcomes.

Along much of Florida’s Gulf Coast, inequities are more common between neighborhoods in the same city than they are across the country.

And they can affect everything from life expectancy to earnings.

That’s according to the Child Opportunity Index 2.0., the most extensive dataset on neighborhood conditions for children to date.

The COI ranks neighborhoods by level of child opportunity from very low to very high in the 100 largest U.S. metropolitan areas, where two-thirds of children live.

An interactive tool also allows users to look up child opportunity levels by metro across the nation.

In the Sarasota, North Port and Bradenton metro areas, the map illustrates how children’s opportunities can be worlds apart, while geographically a hop and a skip away.

Race and ethnicity were not among the indicators used in the research; however, the report did reveal that nationally, roughly 60% of black and Hispanic children live in low or very low-opportunity neighborhoods compared to roughly 20% of white and Asian/Pacific Islander children.

“We didn’t go into detail about causes behind low-opportunity neighborhoods, but segregation is closely connected to the legacy that persists and the practices that reinforce these patterns, like lending, housing and landlord discrimination and low-resource schools,” Noelke said.

Metros in the southern part of the country have lower child opportunity scores than those in the north.

Lakeland made it into the top 10 lowest ranking metros for child opportunity, and top 10 list of highest proportion of children, 31%, who live in very low-opportunity neighborhoods.

Among many benefits, when children live in high-opportunity neighborhoods and are surrounded by adults who have higher graduation rates and work at fulfilling fair-paying jobs, it sends the message that such goals are attainable.

When they live in low-opportunity neighborhoods, reaching their full potential is a challenge.

Those are just some reasons why addressing inequities highlighted in the COI can elevate not only families but whole neighborhoods.

“There are a lot of social consequences. At some point, the problems you don’t solve early cost everyone, and the benefit will benefit everyone. If you treat children with medical issues or give them access to quality education, they’ll be less likely to rely on social support systems later on,” he said.

The report aims to provide data to identify and address specific zones of need where policymakers, nonprofits, and organizations that support families can make the most impact.

Noelke said the next report will be published in two or three years.

The COI 2.0 is a collaboration between Brandeis University’s Institute for Child, Youth and Family Policy, the Diversitydatakids.org Project.