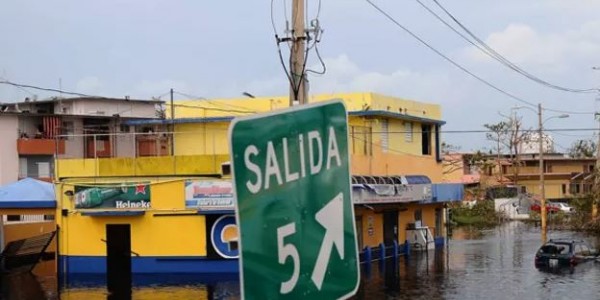 How Technology Companies are Restoring Connectivity in Puerto Rico

Posted on November 13, 2017 by Catherine Cheney
Editor's Note: This blog originally appeared on Devex. Since 2011, The Patterson Foundation has invested nearly $1,400,000 to support NetHope's work restoring communications capabilities after a disaster. Throughout these efforts, the people impacted have consistently stated how important the ability to communicate is. To this end, we have learned that "Communication is Aid."

SAN FRANCISCO — During the next few weeks, Facebook employees will join forces with NetHope, a collaboration of leading international nongovernmental organizations, to assess the state of connectivity in areas impacted by Hurricane Maria.

“With 90 percent of cell towers on the island out of service, people can't get in touch with their loved ones,” Facebook CEO Mark Zuckerberg wrote in a Facebook post last week, announcing that the Silicon Valley-based company would be sending members of its connectivity team to Puerto Rico to deliver emergency telecommunications systems. “And it's harder for rescue workers to coordinate relief efforts,” he added.

It is in Facebook’s interest to make sure as many people as possible can access the internet and use its services, and it is one of several technology companies that are stepping up after Hurricane Maria with support that is core to both business and philanthropic efforts. With growing recognition of the idea that information is aid, disaster responders are expanding their efforts to address not only how they can connect during a crisis, but also how they can bring affected communities back online. Technology companies are reestablishing communications as fast as possible for people who have been without power, Wi-Fi signal, and cellular service, a situation that has left them unable to connect with each other and has kept those off the island in the dark regarding the extent of the damage.