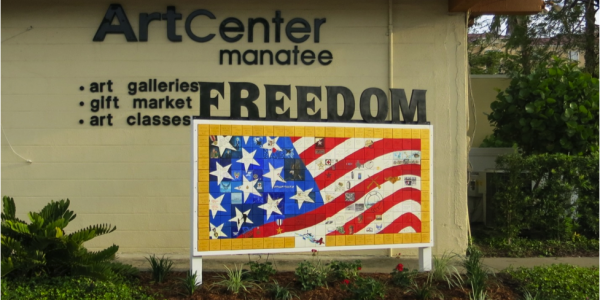 Editor's Note: ArtCenter Manatee is a partner of the Legacy of Valor campaign honoring veterans in Southwest Florida. Christina Sutor, the special events coordinator at ArtCenter Manatee, shares her reflections on the project.

As I started this project, I wondered how many of our own members may have been in the service. As I went into the classrooms to gather veterans and family members to paint canvases for our project, I realized just how many of our “own” had served. They came to me one by one, wanting to be part of this project. I had the honor of hearing each one’s story. Here are a few of their stories.

My husband’s father, Bernard Henry Hahnke, born in Germany immigrated to Rochester, NY with his family at the age of 9 months. He joined the U.S. Marines when he was 23 and fought with the 3rd Division, 5th Regiment, in the W.W. I Battle of Belleau Wood. He was seriously injured twice, both from poison gas and the shrapnel. He developed encephalitis after being presumed dead and left on the battlefield for several days. He escaped burial only when one of the other soldiers noticed his eyes moving. Because of these injuries, his second Purple Heart bears the Oak Leaf Cluster. The horrible injuries, both mental and physical, endured by our soldiers then and now remind us of our great debt to these men and women.

At age 18, I enlisted in the United States Air Force on April 18, 1964, in Minneapolis, Minnesota. After six weeks of basic training at Lakeland Air Force Base in San Antonio, Texas, I qualified for radar school in Biloxi, Mississippi. After eight weeks of training, they sent me to the 603rd AC & W squadron at Langerkoph, Germany, less than 150 miles from “The Berlin Wall,” which was completed 12 days before I landed in Germany. Russia occupied East Germany at  that time. I served three years at this radar site, which controlled the entire European Theater. Minutes after the “Cuban Crisis” erupted we went on base alert. This occurred also when President Kennedy was assassinated. The enemy will take your radar capabilities first. We went from boys to men within hours. In 2002 an old Air Force buddy, Tom Bailey, from Sterling Alaska, put together a reunion for the men who served at the 603rd in the 1960’s. We had our first reunion in Denver, Colorado in 2003. A second reunion was held in Washington D.C., and I had the honor of laying the Wreath on The Tomb of The Unknown Soldier at Arlington Nation Cemetery on September 11, 2005. This was by far the most emotional, rewarding, and honorable thing I have ever done. Our next reunion will be in Kansas City, this fall.

As I stood looking at the Freedom Mural the day of the unveiling, my hope is that every passerby that sees this Freedom Mural takes a moment to remember and pray for all our service people. That evening, I watched a movie with my husband; “Captain Phillips.” At the end of the movie, I had a profound awareness that being in the service is not only about war, but it also means to be humanitarian.

One young woman, Jessica Baldwin, who painted canvases, told of a brief story of one tour she had in the Navy. She was deployed to Haiti after the earthquake, to bring relief and food. There were several women ready to deliver. They brought them aboard the ship to deliver their baby and by having their baby on the ship, the child is considered an American. I thought that was quite incredible. There are many more stories to be told. I am honored and proud to have been asked to participate in this wonderful project as part of the entire community's dedication to the Legacy of Valor campaign honoring veterans in Southwest Florida.