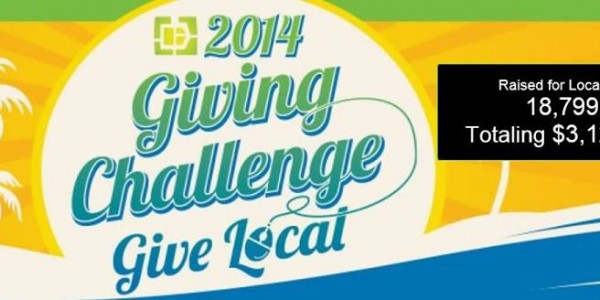 Posted on June 01, 2014 by The Patterson Foundation

The excitement for the 2014 challenge was on a whole new level. Part of Give Local America, a national movement to reignite the spirit of giving across the country, The Giving Partner's 24-hour Giving Challenge raised $3.1 million from more than 19,000 online donations in 24 hours. Our region was No. 1 out of 115 communities! Nationwide, the Give Local America raised $53.3 million.

Some highlights from our region's day of giving:

1) $450,000 in match money from The Patterson Foundation for new or increased gifts benefited 66.5 percent of organizations that participated in the challenge. TPF's match was driven by the amount of prize money contributed by collaborating foundations at a 2:1 ratio.

2) $225,000 in prize money from collaborating foundations was available throughout the challenge.

3) Human services agencies benefited from the most gifts and donations with animal services, arts and culture, education and youth development closely behind.

4) Donations during the 2014 challenge originated from 29 countries -- from the United Kingdom and New Zealand to Malaysia and the United Arab Emirates.

5) 69 percent of donations made were $50 or less -- indicating that philanthropists of all levels participated in this year's challenge.

7) The following organizations did the best job of driving people to view their profiles on The Giving Partner during the challenge (each received $4,000 prize).

9) Prize for best business partnership went to Louie's Modern and Embracing Our Differences.

10) The best overall campaign was a tie that went to Hearing Loss Association of America and Cat Depot.