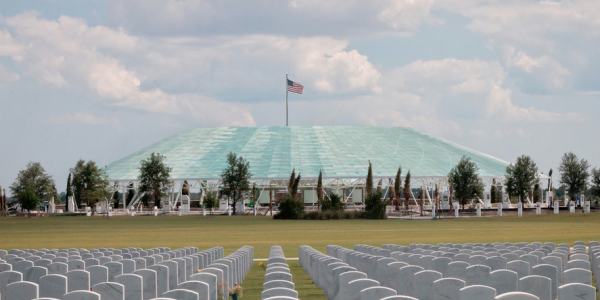 Posted on June 27, 2014 by The Patterson Foundation

Consoling a nation reeling in the twilight of a Civil War that ended the lives of an estimated 620,000 Americans, Abraham Lincoln faced the crowd at his second inaugural address and implored his citizens “…to care for him who shall have borne the battle, and for his widow, and his orphan…” This need, so great then, is no less vital today.

Tomorrow, in an event four years in the making, this call will be answered at Sarasota National Cemetery when The Patterson Foundation dedicates Patriot Plaza to the community.

A 2,800-seat ceremonial amphitheater, Patriot Plaza will provide a home for our community to host future events and ceremonies honoring the contributions of those who serve, have served and may serve in our nation's armed forces. Its inspired collection of art installations, depicting stories of service and sacrifice from the Civil War to our more recent conflicts abroad, will give visitors the opportunity to absorb and reflect upon the actions of those responsible for the freedom we enjoy daily.

The Patterson Foundation fully funded $12 million for the design and construction of Patriot Plaza in a unique public-private partnership with the U.S. Department of Veterans Affairs - National Cemetery Administration (NCA), the first time a private foundation has been commissioned to work on an enhancement of this magnitude at any of the NCA’s 131 national cemeteries.

This partnership, which began in 2010, is the latest entry in an intertwined past that saw Joseph Medill, Jim Patterson’s great grandfather, play an instrumental role in Abraham Lincoln’s ascension to the office of President. In 1862, two months before the costliest single day of fighting in American history at the Battle of Antietam, Congress authorized Lincoln to purchase land that would serve as the foundation for the country’s national cemetery system. The Patterson Foundation is further connected to our nation’s armed forces through the contributions of Captain James Patterson, a West Point graduate who served in World War II, and James’ father, World War I veteran Captain Joseph Medill Patterson.

Just 12 percent of veterans take advantage of their burial benefit, despite the valuable services offered by our national cemeteries. Patriot Plaza aspires to highlight this value to the more than 100,000 veterans and military family members in our region.

The Patterson Foundation set the stage for Patriot Plaza’s community dedication through the Legacy of Valor campaign, a community effort to honor veterans, inspire patriotism and embrace freedom. During Patriot Plaza's construction, The Patterson Foundation worked with 100 regional organizations to develop and boost the capacity of activities and events held to honor veterans and their families. The effort resulted in more than 200 events and created excitement in our community for the arrival of the region’s newest pride point.

On that day long ago in the nation’s capital, Lincoln spoke of an obligation that continues to require our most sincere efforts. Patriot Plaza conveys the stories of our heroes and the ones for whom they fought with a vibrancy that turns the venue into a living memorial, one that will move and inspire its visitors for generations to come.