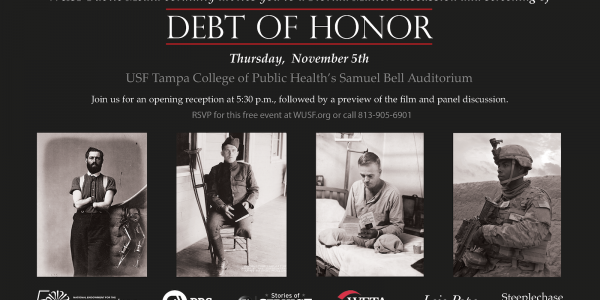 Fostering connections for our veterans through storytelling

Posted on November 11, 2015 by The Patterson Foundation

Many veterans find themselves facing an uncertain future upon returning home. For disabled veterans, the shroud is considerably thicker. Removed from their comrades and dealing with injuries to mind and body, they are expected to forge ahead in a world starkly different than the one from which they came – with a new set of challenges.

Connecting former service members with their communities is essential to their reintegration and long-term well-being. This process can begin with something as small as giving veterans a platform to share their stories with others to break down walls and foster empathy. It’s an approach that The Patterson Foundation’s Military Initiative emphasized locally – and one that continues to move the needle on veterans’ issues elsewhere.

WUSF Public Media, a key partner during the Veterans Legacy Summit, worked hand in hand with The Patterson Foundation to bring the stories of the one percent of our country’s population who serve in the armed forces to the other 99 percent of Americans. Their continued commitment to this model was on display during a recent event featuring a preview of the documentary “Debt of Honor.” Directed by filmmaker Ric Burns, “Debt of Honor” – a phrase coined by George Washington – illustrates the experiences of disabled veterans throughout our nation’s history to educate others on their contributions to our way of life.

Nearly 4 million U.S. veterans live with service-connected disabilities – wounds which never truly heal and often alienate them from society. As illustrated in Patriot Plaza’s art installations, this issue has afflicted generations of veterans – although it has become increasingly prevalent in recent history. As the film illustrates, this is due to medical advancements that are helping our wounded heal from injuries that were previously fatal, in addition to a growing awareness of PTSD and other injuries which manifest themselves in less overt ways.

The screening was followed by a panel featuring Burns and U.S. Army veteran J.R. Martinez. Martinez, who has raised awareness for other disabled veterans through notable TV appearances and his career as a motivational speaker, encouraged civilians to start a dialogue with veterans about their service and injuries – adding that saying nothing is far more harmful than broaching the topic. Furthermore, both panelists stressed that veterans are a valuable resource to our country – echoing a message embraced communitywide during the Legacy of Valor campaign.

Through WUSF’s emphasis on in-depth storytelling and the conversations that followed, many of the same messages the Military Initiative sought to convey will spread to new audiences throughout the region – encouraging the development of new connections and community efforts for our heroes and their loves ones.