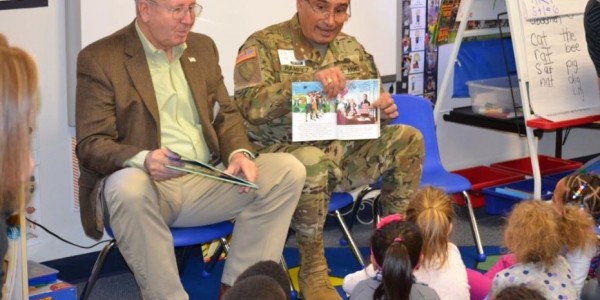 Early Education and Health Key to US Military Enrollment

Posted on August 05, 2018 by Kim Doleatto, Herald-Tribune Media Group
The military counts on healthy young Americans with a high school diploma and clean record to join their ranks, but the number of those who fit the bill is limited.

According to 2017 Pentagon data, 71 percent of young Americans between 17 and 24 are ineligible to serve in the military due to inadequate education, criminal records, and obesity.

“If only 29 percent of young Americans meet the minimum requirements, and of that count those who have the proclivity to join, it’s not enough. It will be an impact on our national defense,” said George Trautman, retired lieutenant general for the United States Marine Corps.

That’s why after serving for 37 years, Trautman joined Mission: Readiness.

Formed in 2009 by retired U.S. generals, admirals, and other military leaders, the bipartisan nonprofit advocates for national and state policy solutions that champion early education, fitness and nutrition in hopes of nurturing a larger pool of military-eligible citizens.

“One in three young people are too overweight to join and 40 percent are ineligible due to crime,” he said.

“One of the things we’ve learned in the data is that enrollment in early childhood education, even while mainly focused on academic skills, shows evidence that it also affects obesity rates.”

The same can be said about criminal behavior.

Access to early education is linked to an increased likelihood of eventual graduation. And while there is no direct link between incarceration and dropping out of high school, there is evidence that those who do are exposed to many of the same socioeconomic forces linked to crime.

According to the Bureau of Justice Statistics, 68 percent of state prison inmates haven’t earned a high school diploma.

They are also disproportionately illiterate.

Faced with the scarcity of military-ready youth, two choices arise: Lower admission standards or raise health and education at the policy level.

It advocated the passage of the Healthy, Hunger-Free Kids Act of 2010 that helped update school nutrition guidelines to reflect that latest evidence on obesity.

Mission: Readiness was a leader in protecting physical education programs in California, Florida, Illinois, and Tennessee.

Its members pushed for state and federal policies to expand access to early education and ensure all children are kindergarten-ready, while educating policymakers about the connection between academia and the next military-eligible generation.

Trautman said lowering admission standards, regardless of the numbers, wouldn’t be the solution.

“It comes with a degree of risk and I don’t think we want to take that with our national security,” he said. “If you choose to send your son or daughter to fight, you want them to be alongside people who are on the right track.”