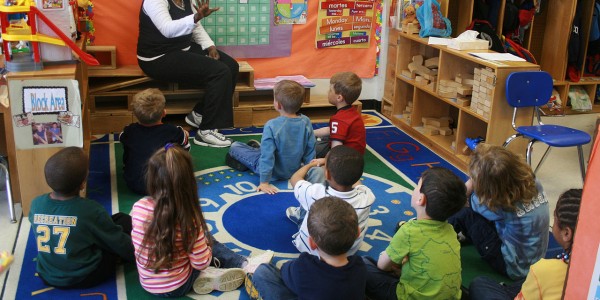 Posted on June 22, 2015 by Beth Duda, playwright and director of the Suncoast Campaign for Grade-Level Reading

We all look for opportunities with big payoffs. What are the small changes we can make to our diets that will result in better health? What apps can we buy that will result in more productivity? What stock pick can I make now that will make me seem like a genius in 10 years?

Last week, I had the opportunity to attend an event in Tampa called Joining Forces for Children, which was hosted by United Way Suncoast and PNC Foundation. The keynote speaker, Rear Admiral Casey W. Coane (Ret.), started his remarks by making us aware of some pretty startling statistics.

75 percent of all young Americans are unable to join the military primarily because they are too poorly educated, have a serious criminal record, or are too overweight.

One in four young people in America do not graduate from high school on time.

As you can imagine, those statistics cast a pall over the room. None of us were feeling like we were on our way to a big win. Who or what was responsible for these dreadful numbers? Before we could spin too far into a mental blame game, Rear Admiral Coane suggested everyone in the room, everyone in the community has a role to play in turning this national crisis around. It can be done with an investment resulting in huge savings and increased revenue.

What is the investment? High-quality preschool education.

High-quality preschool education increases the ability of children from low-income families to benefit from elementary and secondary education, which raises the graduation rate. It generates economic returns that can result in less need for welfare assistance, fewer claims for unemployment benefits, and higher income tax payments.

Men and women who experience high-quality preschool are less likely to burden the criminal justice system, and more likely to live a drug-free lifestyle. The Abecedarian Project, one of the world’s oldest and most oft-cited early childhood education programs, has data showing that the positive effects from high quality early learning last well into adulthood.

Sally McCrady, chairwoman and president of The PNC Foundation, drove home the Rear Admiral’s point when she quoted the following, “For every dollar spent on high-quality early education, society stands to gain up to $16 in long-term savings.”

What? An investment of one dollar allows us to gain $16. That’s the kind of big win we can all get behind.