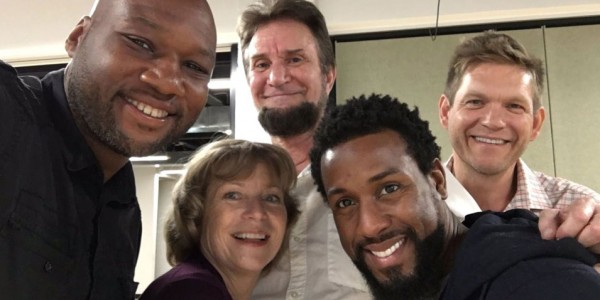 A Walk to Respect — A Week to Remember

Editor's Note: Ben Tollefson, is on the Suncoast Campaign for Grade-Level Reading Engagement Team and served as company manager for this production.

When I first met with award-winning playwright Beth Duda to discuss working on her new one-act play, Abraham Lincoln and Frederick Douglass, A Walk to Respect, I was immediately impressed by her thoughtfulness and clear communication style. As a theatre artist who moved here from NYC, I was itching to get involved in the local theatre scene. This show was the perfect opportunity to dive in. Produced by The Patterson Foundation in partnership with Westcoast Black Theatre Troupe and performed for a week across Sarasota and Manatee counties, Abraham Lincoln and Frederick Douglass, A Walk to Respect, is a 50 minute staged reading that follows Abraham Lincoln and Frederick Douglass, two leaders, who despite their differences, built a meaningful friendship based on mutual respect. Also, cool fact, it's told in their own words. If you think that sounds like compelling theatre, you're right. That's probably why the show was SOLD OUT! Also, did I mention that performances were free to the public? Yep, let that sink in... FREE, thanks to The Patterson Foundation. In case you missed it, let me walk you through the week of the show.

Two professional actors were flown in for the multiple performances — the dynamic Joel PE King from Atlanta to be Frederick Douglass, and the incredible Michael Krebs from Chicago to be Abraham Lincoln. I have to mention Michael's resemblance to honest Abe. I picked him up at the airport and no signage was necessary. His likeness to the 16th president of the United States, even in modern clothing, is uncanny. The show also featured Sarasota's hometown hero, Cedric Hameed, a gifted spoken word poet. Cedric not only narrated the piece, he also beautifully weaved in his own original poetry. The blend of Lincoln and Douglass's flowery language from 150 years ago with Cedric's modern prose drew me into a linguistic tapestry that made me question my understanding of the past as well as its impact on the present. Before this production, I didn't know that Lincoln was willing to let slavery "die a slow death" over the course of 100 years in order to save the union (wait...what?!), or that Lincoln's wife gave Douglass his favorite walking cane as a symbol of the high regard in which Lincoln held Douglass. (Incidentally, it was Beth's discovery of this gift and her subsequent research into their relationship that inspired her to write, "A Walk to Respect").

Like all production weeks, I knew it was going to be busy, but I had no idea of the impact the show would have on everyone who came in contact with it. From the very first rehearsal, this show sparked deep conversations. We discussed racial inequality: What has changed in the last 150 years, and what still needs to be addressed? The power dynamic between slave and slave master (as Abraham Lincoln said, "Nearly all men can stand adversity, but if you want to test a man's character, give him power.") The lack of civil discourse in our modern landscape: Why were these two men, who were ideologically opposed, able to come together and discuss their differences while current politicians seem to interpret engaging with the other side as a sign of weakness or betrayal!? These discussions would often extend our breaks beyond the allotted time, and we would hustle to get back on schedule, cast and crew buzzing with excitement about the work.

This excitement to learn, understand, and examine extended to those who saw it too. After each show, we held a talkback with the audience. From a recent high school graduate who was annoyed she was not taught anything about this relationship in US History class to a woman whose grandfather was in a famous photograph with Lincoln, it was fascinating to see the effect the show had on people of all ages. Young or old, in nearly every talkback session, someone would comment on how the issues from over a century ago are surprisingly relevant to our current experience.

To say that I'm grateful to have been a part of that busy week putting up Abraham Lincoln and Frederick Douglass, A Walk to Respect would be an understatement. I'm not only honored to have worked with talented, thoughtful artists on an impactful and inspiring show, but I'm also honored to have witnessed something truly meaningful, particularly in this modern day – people connecting with each other. That's part of the magic of theatre and why I believe a show like this can strengthen communities – giving people the chance to come together, share, and grow. If you think that sounds a bit lofty, then you clearly need to spend more time with Beth Duda. Thank you, Beth and the entire team. My "Walk to Respect" was definitely a week to remember!